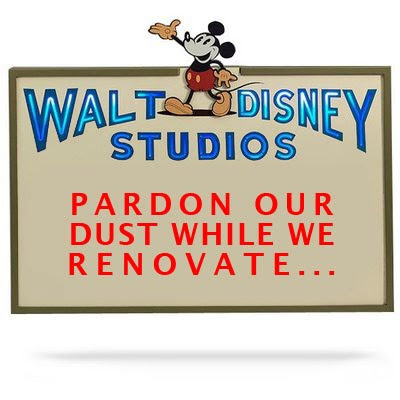 And so the deck of cards changes even more...

Truthfully, I was surprised when he wasn't let go when Dick Cook was fired. If you haven't heard the news, Oren Aviv, the President of Walt Disney Studios Motion Picture Production has been fired. Or resigned if you believe that Dick Cook did the same.

Much of the slate for this anointed marketing wundkind hasn't exactly panned out. He was one of Dick Cook's chief suits and was believed to be the one to succeed him should he step down. Aviv was the one primarily responsible for "National Treasure" and had guided much of the production as well as development over the past two years. Many of the projects he approved were disappointing in their box office returns, others like the "Jungle Cruise" adaption have failed to materialize. Here is his announcement:

Avis said, “As of today, I'm stepping down from my position as president of Production, Walt Disney Studios. I have loved every day that I have been at the studio and feel incredibly privileged to have been part of a team that enriched my life for 20 years.

I will miss all the amazing filmmakers, the many talented actors and most importantly the lifelong friends I've been so lucky to work with throughout my Disney career.

I'm proud of the hundreds of movies I've helped to make and market, especially the studio's upcoming films, from Alice in Wonderland and Prince of Persia to The Sorcerer's Apprentice and Tron. All have been extremely rewarding creative and personal endeavors for me, and have allowed me to work with the best group of executives and staff in the business.

I wish Disney, Bob Iger, Rich Ross and their new teams great success for many years to come.“

A successor will be named at an appropriate time.

Expect more fallout as the Studio shakes off the last remnants of the Cook regime and moves forward with Ross' vision. As the NY Times artile mentions; expect a shake up in the home entertainment division soon, as well. And then there are "other" evolving situations.

Developing much more than you would know...
Posted by Honor Hunter at 2:07 PM

Although I very much enjoy the National Treasure films and think they are a good fit for Disney, I knew I wanted Oren to go the moment he got his promotion and said he wanted Disney to make more movies like "The Pacifier." That's how we end up with junk like "Old Dogs." Blech.

The animation building renamed after Roy.

Oren getting fired. Looking for a replacement.

The home entertainment division is getting restructured.

Thanks for the heads-up, Hunter.

Read this, not too encouraging...

I hope the next move is for Disney to get rid of the Muppets. Let some other schmuck studio overpay for them. Yeah, they got a lot of attention for Bohemian Rhapsody, but their Christmas special - despite the puppets appearing on TV hyping it - flopped TWICE (it was rebroadcast). Only a tiny niche audience digs anything they do, and it's not a large enough audience to bring forth a profit.

And that article linked to above seems a little hysterical. Whoever is quoted as saying "they don't have franchises, they don't have plans" is an idiot. Ross just got there. If there are no plans or franchises then you would need to blame Cook for that. And I'm not surprised at all that Oren got fired. I think alot of the the studio's recent disappointments came from failed marketing, and marketing is where Oren came from.

The one thing that makes me nervous is the strategy of farming out production to all of these partners -- DreamWorks, Zemeckis, Marvel, Bruckheimer. They want to start focusing on Disney branded entertainment, but Disney isn't actually producing any of the films. Seems a little odd to me. And whether you like the films or not, "Wild Hogs" and "The Proposal" demonstrate that WDS can still produce big hits.

I wouldn't bet the farm on it.

The Muppets are slowly appearing everywhere: Disneyland commercials, TV specials, you tube, new web site, an upcoming movie, Etc. This is Disney's selected marketing approach to introduce them to a new generation.

They're not going anywhere. In fact, your going to see more them.

The so-called Muppet movie is one of those Dick Cook projects that is now likely never to happen.