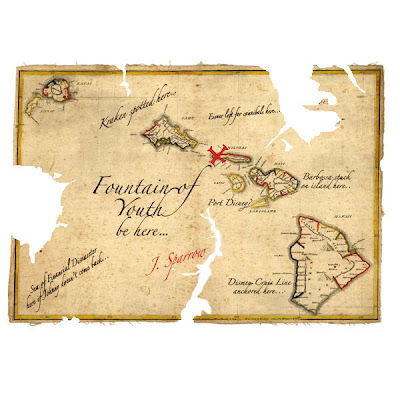 The Mouse is determined to let everyone know that POTC 4 is a go...

Johnny Depp must be happy with the script for the sequel to the his most famous character or at least he's confidant enough to be moving ahead. I don't think Walt Disney Pictures would be mentioning a release date, cast, crew and a general start date if they weren't positive that Captain Jack was on board.

It appears that much of "Pirates of the Caribbean: On Stranger Tides" will be shot in Hawaii (specifically Kauai and Oahu). Not a bad place to shoot a film, if you ask me. So I guess that the Fountain of Youth is in the Islands, of all places. Disney keeps making references to a continued commitment to Hawaii, with the new Resort Hotel, Cruise Line possibilities, LOST, ect. and I someday dream of them deciding to go all out and building an entire resort (hotels, theme park, shopping areas) designed a new variation of Port Disney concept there. Perfect spot, don't you think? But it would be an expensive proposition that I don't see them approving in these troubled financial times. But I can dream, can't I?

Back to the film. I know people have referred to Hawaii as a paradise, but I guess Jack Sparrow had some inside knowledge based on that little map he had. We don't know where the actual setting of the film will be, but if they're going to remotely follow the book, I'd say it's going to be in the Caribbean somewhere in the Atlantic Ocean. But they'll be filming in the Pacific Ocean... hmmm? I wonder if New Orleans is going to play any role in this film. And then there's the ultimate pirate villain that will likely be causing Sparrow and Barbossa many problems. Now, I can't wait to hear about this new script. Actually, I'm debating if I should read it if/when I get it or wait for the actual film.

It is after all, only one more summer away...
Posted by Honor Hunter at 6:15 PM

Now, to anyone reading this; synergy is not necessarily a bad thing. Walt himself was no stranger to it.

Pretty cool that they are filming in Hawaii.

Port Disney in Hawaii? That would be soooooo great! I wish WDI would listen you you Honor. That would make the Islands a true destination for me.

Sea of Financial Disaster here if Johnny doesn't come back.

You have very good eyesight.

For someone with a blank stare...

the islands are beautiful enough as they are right now

no need to polute them even more with commercial expansion

Yeah, because putting places on them where people can go see the Islands and other people can get jobs is bad. Better just leave it all pretty and not allow anyone to see it that would be better.

Go hide in the woods, Hippie.

No you shouldn't expand too much or everything good about the place will be lost.
The hotel is one thing, I say no to huge theme park resorts.
Can't Disney fans go away on holiday without Space Mountain and Mouse Ears??

They tried that, it failed.

Who tried what and failed? You should be more specific.

But for Youzney, do you realize that a Port Disney doesn't have anything like a Space Mountain. It's totally original and the only thing that came out of it was Tokyo DisneySEA which is amazing. It'd be great if they had a Port Disney with a variation on what Tokyo got Maybe closer to what was going to happen in Long Beach. That way it would be more of its own unique experience apart from the Tokyo park. This one would based on the ocean, not just a theme park, but the entire resort. From the hotels, shops and the theme park.

Maybe the resort could have room for two parks, they could build a DisneySEA type now and have room for expansion with a Discovery Bay type park next door if it's a hit somewhat later. An entire resort themed to adventure and exploration, not just a park built around that, but the whole resort!

That would be amazing.

I'm sure you're not stupid enough to think that I thought Port Disney had Space Mountain. That was an example off the top of my head of a typical Disney attraction.

What I'm saying is can't Disney fans go on holiday somewhere where there isn't a Disney ride and Mickey Mouse meet and greet?
Obviously not many can.

In essence, the point is that Hawaii doesn't need a theme park. A hotel is fine. Why not provide more activities in line with the culture of the location.

I'm sure Port Disney would feature other additional features, but the concept DOES use big theme parks as the primary sell which is not required.

By the way. Honor - anything you want to say about the Hawaii resort since the name and a few details are out now?

You wanna get a movie that every mother, daughter, child and father will see? Get Robert Pattinson to play the new sidekick to Jack Sparrow.