Could it all have started with a rabbit... 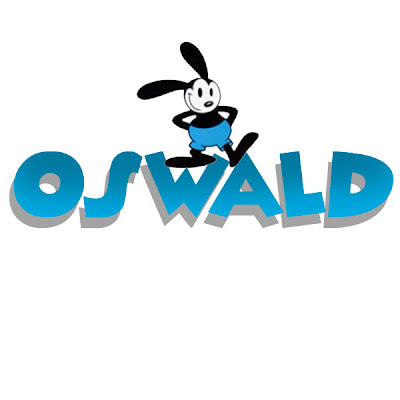 "Trolley Troubles" would be the first of over twenty shorts featuring the iconic first animated creation of Disney (The Alice Comedies don't count since she's not animated). Walt would eventually lose the rights to this character, forcing him to create another character from scratch on a long train ride back to California that turned out to be a mouse...

It's all hard to believe that a strange deal involving Al Michaels would lead to him coming home, but it almost reads like an improbable fairy tale. Then again, fairy tales are pretty synonymous with Disney, so let's honor Oswald. He truly is a lucky rabbit.

Wouldn't it be nice to see him in something today? Like a new short or a new special? He's been waiting a long time to be animated again. And he's still very popular, if you've tried to get some of those very elusive/exclusive rabbit ears you have experience with his celebrity. But imagine him up on the silver screen again as you sip your soda and eat that popcorn.

Oswald does have a major role in the Wii game Epic Mickey and co-stars in Epic Mickey: The Power of Two. I'd love to see Fantasmic! at the Walt Disney Studios park reworked to incorporate the Epic Mickey storyline.

Could you possibly referring to this: http://wearemoviegeeks.com/2012/09/walt-disney-animation-studios-debuted-newly-restored-once-thought-lost-1928-oswald-short-hungry-hobos-at-telluride-film-festival/

I think Epic Mickey would make an epic film! The videogame has a great story, with all of the right elements for a great Disney movie. And a film version could lead provide a much-needed big-screen comeback for BOTH Mickey and Oswald! Come ON, Disney! Make it happen!