Are you marketing guys paying attention... 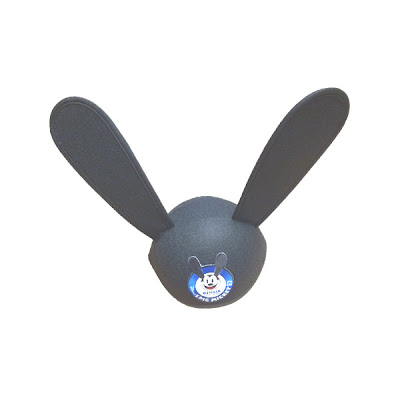 You're looking at one of the most asked for items in Buena Vista Street...

And it's not for sale. It's not even available. But the Cast Members working at Elias & Company as well as other stores/shops like Oswald's gas station have been telling guests we don't have any. Not that they're out of stock, but they don't have any Oswald the Lucky Rabbit Ears.

This is actually a giveaway item that the makers of Epic Mickey 2 were handing out to people at E3. Little did they know they'd create such a demand for something. These are now collector's items that are selling for between $80 and $400 on ebay right now. And still people are asking where they can buy them.

It doesn't help seeing all those people walking around the park wearing them. It makes people think they can be purchased there. And if all those Cast Members keep telling their managers, and those managers tell their higher ups, then we might see some of these available in the parks sometime in the near future. It's not like the Mouse doesn't like to make money on something.

Especially when so many people are willing to spend the cash so they too can walk around the park wearing a pair...
Posted by Honor Hunter at 6:45 AM

Ain't that the truth!

There is already a fair amount of Oswald merch available on Buena Vista St, it's suprising they didn't think of Oswald ears on their own.

I bought a pair, off ebay for $30 and I love them. I have heard mixed rumors that they are making them and they aren't, but the big D and the execs would be a Michael Esiner not to get the chinese factories pumping these out. Cant wait to sport mine at WDW and DL later this year, they look at me funny in Colorado.

Love these and bought some off ebay, the big D better ramp up production, as the people want these...NOW. Also lets bring out character time with Oswald while we are at it.

Man, I knew about Oswald way before Epic Mickey came put, always a favorite character of mine, glad to see he's appearing more and more.

While I would hope that the Oswald Ears would make it to production, Disney has a lousy track record of producting merchandise that adults would be interested in.

Remember when you could buy Tigger clothing for adults? Not anymore...

I just bought some from Ebay as well! I'm a huge Oswald fan and I'm sad to know that Oswald STILL isn't advertised as much as he deserves at the parks. Well..except for Japan. They have a whole truck-load of Oswald merchandise! Even a parade float! retty annoying if you ask me!