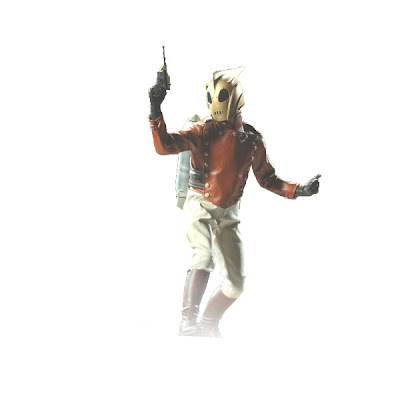 Walt Disney Pictures released the film, "The Rocketeer" on audiences across America. Sadly, it didn't light the world on fire, and was considered a disappointment by the Suits up in Burbank. This was the Mouse's attempt to replicate the success of "Raiders of the Lost Ark" with a much more unfortunate outcome. It has grown to become a cult classic, and despite flaws, is a sweet, earnest story that is rarely told anymore with a deeply nostalgic, almost Capraesque view of the world. In a sense, it's a prequel to "Captain America," which is ironically by the same director, Joe Johnston.

While I dream of a sequel to it, I still have the film on DVD and the memories of seeing it at the El Capitan opening weekend with my Mom and Dad. It's a fairly faithful adaptation of Dave Steven's beautifully drawn, comic mini-series that I still love to see to this day.

If you are a fan of this and happen to be walking down the gorgeously detailed Buena Vista Street of DCA, stop into Elias & Company. Take a look at the mannequins up in the second story of the department store. All are decked out in 30's attire, including one fella that happens to be dressed in a familiar suit belonging to a pilot named Cliff Secord. A smile will appear on your face as you dream. Hey, if they can make a sequel to "Tron," then why not this?

I was just a young kid when this movie came out, an it has stuck with me all this time. My favorite Disney movie. A sequel would be so cool.

There's also a few fliers for Bigelow Airfield around the land, and a Poster for the South Seas Club in the Fifer, Fiddler, and Practical Cafe. I suppose a retheming of Soarin' to the Rocketeer, and Taste Pilot's becoming the Bull Dog Cafe would be too much to hope for huh?

While I love that idea, Eric(particularly the Bull Dog Cafe), it wouldn't fit Condor Flats theming, which is 60's, or the Grizzly Peak area, which is 50's.

Now, the Hollywood Land area? That's the 40's so something could go there. How about that poster you mentioned in the Fifer, Fiddler, and Practical Cafe? Wouldn't that make a great idea?

Neville- but that's the point of retheming it right? They could throw out the 60's theme, just like they threw out the modern Extremem sports theme of GRR and themed it to the 50's. I think Bulldog cafe is the better idea, as I know that Rocketeer itself has limited appeal and is nothing that they are likely to theme a major attraction to, but just a restaurant like Taste Pilots? It seems like this would be a relatively minor retheme that would make the transition nicely from BVS and Condor Flats.

I loved this movie when I was a child. x

I'm all for a sequel but I'd fear they'd ruin it with too much computer graphics.