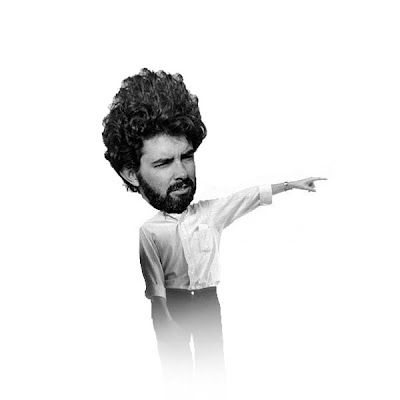 It must be tragically ironic to be a genius trapped in a nightmare of your own creation...

Despite what Decadent Dave says, I don't publish that many posts on the Bearded One. But lately, I've gotten several e-mails about "Star Wars" coverage here at Blue Sky Disney. So I guess it's time for some clarity because I've always felt that clarity was a good thing. It always helps to know where someone stands so as to know where they are going. We can always have disagreements, but at least we can respect the views of one another without coming to the same conclusions.

George Lucas is a man who lives in his own world... literally.

The business of Lucasfilm is his world, and particularly Star Wars is that world. Sure he's talked about doing little independent, art-house films that don't appeal to the public. But it's talk. He keeps pushing that day and those projects off. Trapped in the quicksand of his own success, he seems incapable of escaping it. He was once asked what was Star Wars and what did it mean. His answer, to paraphrase, was that "technology can't save us." The irony in that is he talks about the limitations of the original trilogy and how the FX of the time limited his abilities to tell a story. I'd argue that it's the opposite, those limitations helped focus on story and in so doing, made it much better. Just look at the Special Editions that are closer to what he says he wanted. Look at how he talks about the ability for these new computers to free film makers and look at what he does. Star Wars animated series, Star Wars comedy animated series, Star Wars live-action series (maybe), Star Wars fan documentaries, Star Tours update, ect.

George Lucas made news the other day when he mentioned his plan to step away from the day to day planning of his empire, Lucasfilm. It's been his said intention to go back and make small, personal films that no one will care to see. This is something he's talked about for over a decade, but he now says that he is ready to actually do that.

"I’m moving away from the company, I’m moving away from all my businesses, I’m finishing all my obligations and I’m going to retire to my garage with my saw and hammer and build hobby movies. I’ve always wanted to make movies that were more experimental in nature, and not have to worry about them showing in movie theatres." -George Lucas

And today he took the first step towards that apparently. It was announced that Kathleen Kennedy, who has long been a partner with Steven Spielberg, would take over the operation and running of Lucasfilm. Here's the press release:

SAN FRANCISCO-Lucasfilm Ltd. today announced that Kathleen Kennedy will become Co-Chair of Lucasfilm. In an effort to move forward with his retirement plans, George Lucas will work with Kathleen Kennedy to transition into her new role. Lucas will become Co-Chairman of the Board of Lucasfilm and continue as CEO. Micheline Chau will remain as President and COO of Lucasfilm, and continue to focus on the day-to-day operations of the business.

“I’ve spent my life building Lucasfilm and as I shift my focus into other directions I wanted to make sure it was in the hands of someone equipped to carry my vision into the future,” said George Lucas. “It was important that my successor not only be someone with great creative passion and proven leadership abilities, but also someone who loves movies. I care deeply about my employees—it is their creativity and hard work that has made this company what it is today. As the company grows and expands I wanted to be sure the employees of Lucasfilm have a strong captain for the ship. I also care deeply about our fans and it was important to have someone who would carry on the passion and care that I’ve given the films over the years. So for me Kathy was the obvious choice, she is a trusted friend and one of the most respected producers and executives in the industry.”

Director Steven Spielberg said, “George’s prescience is once again proven by his choice of my long time producing partner, Kathy Kennedy to co-chair Lucasfilm. Kathy has been a member of both of our families going into a fourth decade so it does not feel like she is going to another galaxy far far away. She will get just as much support from me with Lucasfilm as George has given both of us all these years.”

“George is a true visionary,” said Kathleen Kennedy. “I’ve seen him build Lucasfilm from a small rebel unit in Northern California to an international fully integrated entertainment company. I’m excited to have the chance to work with such an extraordinary group of talented people. George and I have talked about the enormous opportunities that lie ahead for the company, and as George moves towards retirement I am honored that he trusts me with taking care of the beloved film franchises. I feel fortunate to have George working with me for the next year or two as I take on this role—it is nice to have Yoda by your side.”

Seven-time Academy Award nominated Kathleen Kennedy is one of the most successful and esteemed producers and executives in the film industry. As a producer she has an impeccable record with a robust filmography working with such filmmakers as Steven Spielberg, Peter Jackson, Martin Scorsese, Robert Zemeckis, Barry Levinson, Clint Eastwood, David Fincher and Gary Ross. As a testament to her standing in the film community, she previously held the position of governor and officer of the Academy of Motion Pictures Arts and Sciences (AMPAS) and currently serves as a member of the board of trustees. She is also a former President of the Producers Guild of America.

Kathleen will step down from her role at The Kennedy/Marshall Company, shifting her responsibilities to partner Frank Marshall. The Kennedy/Marshall Company is currently in post production on LINCOLN, directed by long time collaborator Steven Spielberg whom Kennedy also produced for on the INDIANA JONES and JURASSIC PARK franchises, and THE BOURNE LEGACY, written and directed by Tony Gilroy and produced by Marshall. Under the Kennedy/Marshall banner, the pair has produced such Academy Award nominated Best Picture films as WAR HORSE (six nominations), THE CURIOUS CASE OF BENJAMIN BUTTON (thirteen nominations) THE SIXTH SENSE, (six nominations) and SEABISCUIT (seven nominations), as well as blockbusters including the BOURNE series and THE ADVENTURES OF TINTIN. Marshall will oversee the company’s current slate of projects and continue to expand it via their development deals with DreamWorks and CBS TV Studios.

So we really might see Lucas try to distance himself from his creations. But will he step back in if she makes a decision he doesn't agree with? Could this be a further step toward taking the company public, which Lucasfilm Suits have said was a viable future option? Perhaps even a merger or as I have dreamed; selling the entertainment company to the Mouse? As time passes, we'll see how much control he actually relinquishes. I've always known that he would someday step back, but it's refreshing that it is finally happening. This could be a whole new world of opportunities for George and his fan base.

And after decades trapped inside his creation, it might be that the only way to set himself free is to set IT free...
Posted by Honor Hunter at 4:22 AM

Now we have "A New Hope" that there will finally be a good Star Wars film.

Give the generation of filmmakers and storytellers who grew up and were inspired by George's creation the chance to tell Star Wars stories on the big screen. When Blur or Genndy Tartakovsky got a chance to play in George's sandbox they created some of the most inspired Star Wars stuff in a decade. Can you imagine what someone like Robert Rodriguez, Edgar Wright, or Neill Blomkamp could do with the Star Wars Universe? I think there's a Marvel-level goldmine of adventures to still be told, if and when George can just get out of the way.