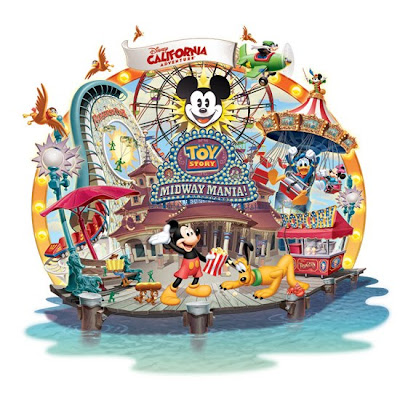 Today the media gets its first look at the new DCA...

While the Disneyland Resort's Second Gate doesn't officially reopen for guests until tomorrow, this marks the beginning of the rebranding as a park that can now truly be said to be a Disney Park. There is no such thing as perfection, and there are areas of the park which need to have more plussing, but people that come to the resort will no longer hesitate when they think about buying a ticket just for Disney California Adventure. It will finally be worth the admission price.

In fact, Buena Vista Street and Cars Land succeed so well at putting you in a Disney world, that they make the rest of the park pale by comparison. Not that there aren't great areas or detailed places in the park. It's just these new additions are so beyond what is/was expected that they leave the modest creations that Imagineers put in a decade earlier in the back of your mind.

Walking down that recreation of 1930's Los Angeles is going to create an entirely different impression for guests experiencing this park. People who have never been here will be amazed by the beauty, and people returning will be stunned at how different it is. The level of detail with the hidden treats waiting for you to find are indescribable and have to be experienced. Main Street's sister had a very successful plastic surgery and her sibling is in the same league for a change.

Cars Land is a wonderfully immersive environment. If you walk down the Mother Road toward the land you will feel yourself drawn into an animated film like no other experience you've had at a Disney park. But if you really want to feel the transformation, go through the entrance at Pacific Wharf. Going under that archway and entering the land there actually is more revealing and successful than the main entrance, IMHO. Even if you're not a fan of the film, your senses will be overwhelmed by the detail. You can't help but be impressed by the experience.

It's been a long road, but after a decade of disappointments, the park is finally the destination Suits expected and fans deserved...
Posted by Honor Hunter at 7:42 AM

One problem. I disliked the movie cars and the entire world that came with it.

They should rename dca lasseter land, as all the changes were made to bolster his films.

Get real dude. You're bitter, and you're in the minority.

Well the truth is that most of the changes ARE Pixar based... but guess what, most fo the success of the last decade has also been Pixar based.

I don't really care where the maource material comes from as long as the end result is great... and this is clearly great.

Also Buena Vista Street has zip to do with Pixar... just as an aside.

Brian, if your implication is that the Little Mermaid attraction is a failure because it doesn't have a long line, it's not.

The reason it doesn't have a long line is because of the Omni-mover system. It regularly handles an average of 1700-1900 an hour, even with a line less than ten minutes.

So don't judge that queue line as a sign that no one rides it. The design of the line and ability to get guests off without creating a long wait is a success.

Honor Hunter I must correct your analysis of the THRC is not quite accurate. The Little Mermaid, because of John Lasseter's concern the ride promoted as an E-Ticket, was to short and had the attraction speed slowed down by almost 25%. This would reduce the high end of your guestimate from 1900 to 1425 THRC. Even if the THRC for The Little Mermaid had no reduction and stayed at 1900, in comparison The Haunted Mansion at Disneyland, with the same ride system has a THRC of over 2500. If you're theory of no queue at The Little Mermaid was because of the THRC, with a higher ride capacity The Haunted Mansion should never have a queue. One only look at the statistics, combined with the drastic difference in wait times to see the unpopularity of the attraction. Another clear another clear indicator of The Little Mermaids lack-luster performance is the size of the queue designed for the attraction, which extensively wraps around the exterior of the building and then into the interior queue. The queue has never filled to use the exterior queue beyond the first week of opening. There is also a huge extended queue to the left of the building, also doubling as stroller parking, which has never been used and is has few, if any strollers parked at any time of the day or night.

My information as to the hourly rate comes from conversations with Mermaid CM's. It is their figures that I referred to.

They have told me how they continually were surprised when TLM opened as to how fast the attraction was able to get guests on and off. If the hourly rates are wrong, then the Cast Members that are running the attraction are not telling me the truth. Since I know several of these personally, I can tell you they are not lying.

Funny, as my family and I waited in both the extended and overflow queue for Mermaid just two weeks ago.

Mermaid is a must do for my family.

Great to hear that DCA is much improved. I'm looking forward to my next visit to the west coast. However, I have to agree that it's unfortunate that so much of the limited space of Disneyland is now devoted to 2 films (the Cars series). With nearly 80 years of creative to content, there's no shortage of inspiration & Disney instead opted for the dull, stereotypical approach of boys like cars, girls like princesses.

I think Mermaid is a great ride. Its got fantastic animatronics and is a classic Disney dark-ride experience.

Thank you Honor for those words about the ride.