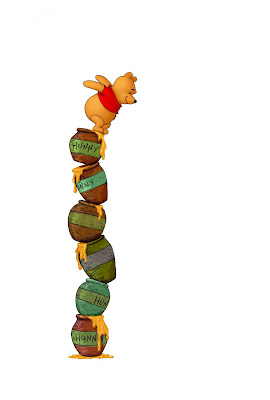 Walt Disney acquired the rights to make a film based on children's book that was very popular in Britain, but not as widely known in America. The author's widow, Daphne agreed to license the stories and characters after much wooing by Disney.

But it would take five years before this agreement would bare fruit. And it wouldn't start out as a film, but a short. A rather large short at twenty-six minutes, but a short none-the-less. Walt would go on to approve two other shorts for production, but he passed before they were put in to production.

Once completed, they were combined into a single story and thus, the animated film that was planned over a decade and a half ago would finally happen.

And now you know it as the classic "The Many Adventures of Winnie the Pooh" film.

one year ago today??

Honor, your time line in this post makes no sense. "One year ago today"..."it would take five years". This doesn't seem accurate or possible. I love your blog, keep up the great work.

1961 Walt gets the rights to Winnie the Pooh.

That would be 51 years ago then, wouldn't it. Not "One year ago today."