Films Of Future Past...

In This Issue, everyone dies... 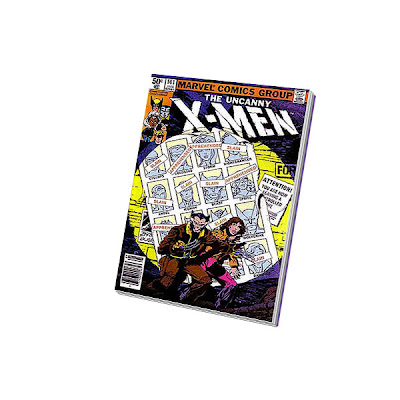 Not all of Marvel's movies will be released by Disney over the next decade or so...

After "Blade", one of the first films to bring on this new age of heroes was "X-Men" from 20th Century Fox. That series ended with a mediocre entree that Brett Ratner directed, only to be rebooted as the fantastically entertaining "X-Men: First Class". There has been very little news about the sequel to Matthew Vaughn's reimagining of the comic set in its original time frame.

Now it appears the sequel may not just be in a different time frame, but multiple time frames. Over at Ain't It Cool News they're reporting that the studio registered the title"Days of Future Past" with the MPAA Title Registration Bureau. For those of you that don't know what this means, just ask a comic geek/Marvel geek and you'll get a very detailed explanation.

The short of it is that that title is the name of a famous two-part story that is now a classic piece of comic culture. It involves the X-Men time traveling to the future and back to prevent the assassination of a Senator Robert Kelly. His death sets into motion a series of events that cause mutants to be hunted down and killed or put in internment camps. Mutants on the run are hunted down by large, killer robots called Sentinels. It's an awesome story that they used as a throwaway scene in the third X-Men film as a battle in the Danger Room.

If Vaughn is going to use this story, or at least parts of it, then it'll be interesting seeing how he portrays this tale of the Brotherhood of Evil Mutants and their battle with Charles Xavier's gifted youngsters. Key players will be missing (like: Wolverine, Kitty Pride, etc.). So structurally, it'll be different, but the story is fertile ground for a great film.

I guess if Disney via Marvel won't have control of some of these properties for a while, it's nice to know that there will be great and exciting stories at least in the meantime...
Posted by Honor Hunter at 6:49 AM