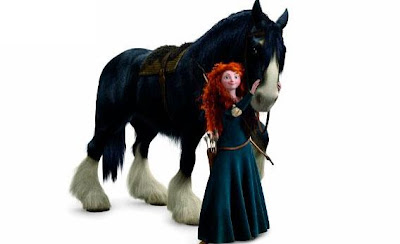 The Lamp's first princess film is out tomorrow and the reviews are starting to pour in...

What say our favorite film critics about Pixar's latest effort, and will its thirteenth film be a lucky or unlucky number?

If you have kids, you’ll want to take them to Brave, and they’ll almost certainly have a good time. If you’re an animation buff, you may have quibbles with the film, which looks great but isn’t up to Pixar’s high standards in terms of story. That’s the problem with creating so many innovative and memorable movies: when you do something that’s “merely” pretty good, it feels like a letdown. - Leonard Maltin

If the Walt Disney Studios logo were the only one on "Brave," this film's impeccable visuals and valiant heroine would be enough to call it a success. But "Brave" is also a Pixar Animation Studios film, and that means it has to answer to a higher standard. - Los Angeles Times

For all its pictorial and vocal beauty, the film's emotional line and dramatic contrivances are both more familiar and less inventive than what's usually delivered by the studio. Younger kids won't mind, but many viewers accustomed to relying upon Pixar for something special will feel a sense of letdown due to the lack of adventurousness. - Hollywood Reporter

Walt Disney began his feature career with a princess story. Now Pixar gives princesses a go after making a dozen other toons, and though the studio brings its usual level of perfectionism and heart to the assignment, "Brave" seems a wee bit conventional by comparison with, say, how radically "The Incredibles" reinvented the superhero genre -- not that Pixar's eager international following will object.
- Variety
The film's greatest strength comes from being emotionally direct and not layering on any post-modern spin. This is not a film like "Shrek" that spend its whole running time winking at the fairy tale form. Instead, it plays everything straight, and in today's media landscape, that feels almost groundbreaking. - Motion Captured

"Brave" is the latest animated film from Pixar, and therefore becomes the film the parents of the world will be dragged to by their kids. The good news is that the kids will probably love it, and the bad news is that parents will be disappointed if they're hoping for another Pixar groundbreaker. - Roger Ebert

No one seems to review a Pixar film without comparing it to other Pixar films. OK, Brave isn't The Incredibles or Toy Story. So? It's still a rousing, gorgeously animated good time. - Rolling Stone

This is less a film in the lustrous Pixar tradition than a Disney fairy tale told with Pixar's virtuosity. As such, it's enjoyable, consistently beautiful, fairly conventional, occasionally surprising and ultimately disappointing. - Wall Street Journal

I disagree with most of these reviews. The film may not be completely groundbreaking, but it is hardly conventional. It is a great story about the relationship between a budding young woman and her mother.

I thought it was beautiful and moving and fun. I enjoyed it thoroughly. In many ways it spoke to my experience as a teen.

I sort of agree with these comments but nearly so harshly. Brave,while it didn't wow me like others have, was a great movie. Also, whoever said that The Incredibles reinvented the superhero genre clearly hasn't seen Chris Nolan's Batman films or The Avengers.