The Mouse has released more pictures of Walt Disney Animation Studios' "Wreck-It Ralph" that comes out in November...

These images come via USA Today, so if you'd like uber-size images then head over there. That first one up top is of Ralph meeting at the central hub, known as Game Central Station, where his AA (Villain's Anonymous) meetings happen with several famous counterparts. 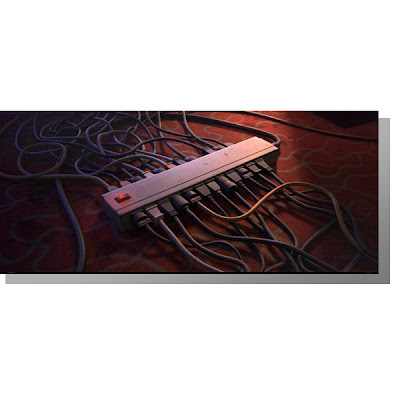 And here is the outside of their meeting place. You can get an idea from this as to how they all meet up in the arcade they occupy. 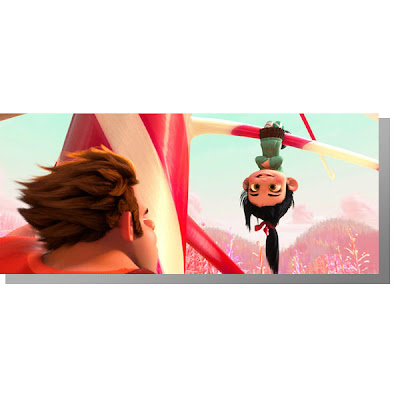 This one is when he meets up with Sarah Silverman's Vanellope von Schweetz, which is basically a fictional game version of Mario Karts. 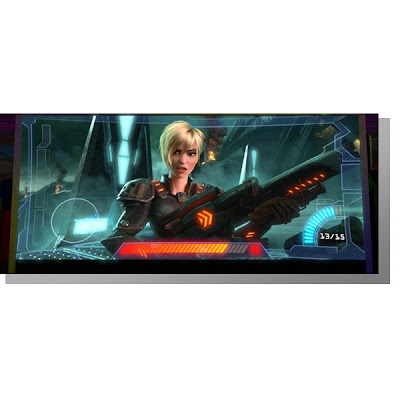 And here is Jane Lynch's Sgt. Calhoun character that Ralph tries to get to whip him into shape so he can be a hero. As you would sumize, it doesn't go as Ralph expects. From the talks I've had with my Bothans, they're really positive on this film and those that have seen the Rich Moore film really like it. What do video games do when the lights go out at the arcade?

darling, the trailer is now up.

I have to say this footage and the stills leave me totally underwhelmed. I wasn't super excited about this movie, but the unique look, that it was going to be grounded at least partially in an 8 bit world, at least promised something unique. However it looks like for the most part Ralph and his friends all exist in the same slick Pixar looking photorealistic world that every other CGI film does, pretty and tanglible maybe, but also getting very boring. And the story hinted at here- sounds interesting I guess, but no doubt it will have to struggle through piles and piles of injokes to make itself felt. I'm sure Disney will be constantly poking us in the ribs "get it? Get it?" and "Did you see that character from that game you remember?" type jokes. Not a bad thing necessarily, but they're track record with story hasn't been stellar and a crutch like this doesn't fill me with confidence that they'll aspire to more than just 80 minutes of injokes.

Check out the trailer and see if it changes your mind at all: http://disney.go.com/wreck-it-ralph/

There are in-jokes, but they are subtle and not necessary to enjoy the movie. If you get them then it layers an added amount of enjoyment on top of a great movie.

No Interest in seeing Ralph. The video game cameos do nothing for me and the trailer just shows how hard Disney is trying to be Dreamworks Animation by showing the A list actors they got to do the voice work and playing Flo Rida's good feeling. Thanks for dumbing down your movies to keep up with the decline in kids attention spans. I agree about the in jokes being stupid. I prefer classic Disney. Not this Bob Iger crapfest

I wish WDAS would leave the CGI to Pixar. Other than that, it looks much better than I anticipated, minus the awful music in the trailer.

Great, great trailer. It's fantastic seeing Disney stretch themselves and do something genuinely different. After two princess movies and Winnie the Pooh, it's nice to see Disney isn't stuck in the past.

I wish WDAS would leave the CGI to Pixar.

CG makes the big bucks these days. They'd be idiots to not do CG.

Also, you'd better not be insulting the Talking Heads.

It looks okay from the trailer. I just hope Disney doesn't forget traditional animation. I hope they remember what it all started with...a hand drawn mouse. All of their classics are hand drawn. They'd be idiots to keep up with CG.

Actually I had watched the trailer already when I posted my comment. I don't know- I've certainly been underwhelmed by trailers before, for films that I later loved. But man, back in the day, glimpses of the new Disney animated film had me drooling. They were little peeks into these brand new totally unique designed worlds that I just had to know more about. Now, they just all seem the same. I could very well find that I like this movie very much; they certainly seem to hint at a very emotional story. And that's always been Pixar's strong point: making sure that despite all the jokes and endless chase scenes, that there's a strong and very basic emotional thread that grabs you. When well executed that always seems to get butts in the seats, whether or not it creates a "great" film that stands the test of time. Here's hoping if for no other reason to keep WDFA alive a bit longer.