Fifteen Or Fourteen And Three...

Rules were made to be broken... 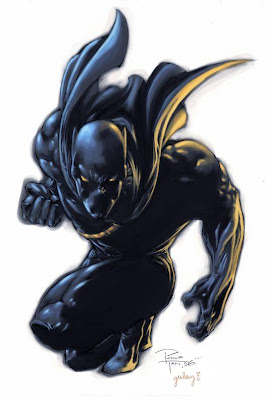 Latino Review has a really interesting rumor on the mystery film that Marvel is planning for 2014...

Everyone pretty much expects the "Avengers" sequel to be one of the two films that Marvel has mentioned as its line up for 2015, but much speculation has surrounded the identity of the other film that will come out that year.


While it has been widely speculated that the mystery film would be the adaptation of "Ant-Man" by director Edgar Wright based on his twitter feed and the comments of Kevin Feige, it now may appear otherwise. The Black Panther may be be the untitled 2014 film if Latino Review's trusted sources turn out to be correct.

But what if there are three Marvel films to come out that year? It's not likely, but Feige has been open to the possibility of having three films out in one year. The current plans call for two a year, but if you look at that schedule there is a huge gap between the second one and the end of the year. A release date change could happen where they schedule the film later in the year, but until then it leaves room for another production if the dates don't move.

Could an Avengers sequel come out in 2014? Doubtful, but with several projects in the fire right now, might the studio take a plunge and give us a holiday release of, say "The Incredible Hulk 2" or "Doctor Strange" even? While the odds are against it, the gap between Marvel film in 2014 and 2015 is awfully long. Could one of the many films on its development slate wind up being a surprise gift at the end of that ?

In a world where a man can turn into a giant green monster you never know...
Posted by Honor Hunter at 5:42 PM

If Marvel plans on making a film of either Ant-Man or The Black Panther they should introduce the character first in one (or more) of the other films. I don't think too many people would be that thrilled to go watch an Ant-Man movie on it's own, but if they fell in love with the character first when he appeared in Captain America 2, they might be more willing to see him in his own movie.

Just knowing that they are making all of those movies has me grinning from ear to ear!!