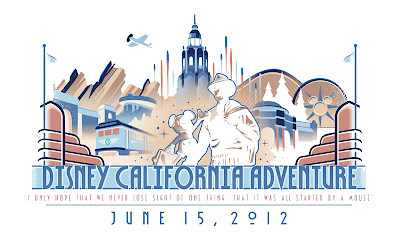 In a week, those entering Disney California Adventure will get an amazing experience...

Let me just say that Buena Vista Street and Cars Land are so detailed, and so amazing that the rest of the park looks bland by comparison. Not to put down all the detail and improvements that have happened over the past five years, but it's truly another level of immersion when you walk down these lands compared to what was there before.

There will be modest improvements over the next few years, but any major adjustments will come later. None are officially approved yet. And they won't until the Suits inside the Team Disney Building have seen the figures, but I don't think they have anything to worry about. This new front entrance and new land are great and take you to a Disney park that fans have hungered for since walking into Sunshine Plaza over a decade ago.

I imagine the wonder in a young child's eyes on that Friday morning, next week...
Posted by Honor Hunter at 7:48 AM