The Alchemy Of DC's Properties...

Will DC strike gold or lead... 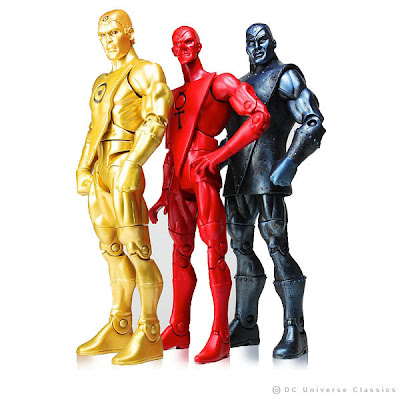 Warner Bros. is still trying to exploit its DC properties on the level of Disney's Marvel properties...

The Vulture has revealed what the property that Barry Sonnenfeld teased everyone that he was working on:

I've read some comments around the Net deriding this as something not to be taken serious. But it actually sounds like a good idea to me. If you know the characters, then you know that this is a comic that is perfectly in tone with the kind of films that Sonnenfeld does. I can picture a film of the same type of action and humor as "Men in Black" coming from this property. Now, it's all going to depend who they hire to write it(Ed Solomon, Roberto Orci, Alex Kurtzman or Damon Lindelof, anyone?), but I believe that this could be a great idea for DC to quietly bring some of their lesser known characters into the mainstream.

There are dozens of characters that are not name Superman or Batman that could be made into a compelling, intelligent and entertaining story inside the DC vaults. I mean, when it comes to Marvel, who would have thought "Blade" would have turned into such an entertaining film? Or even the new film that has... never mind. Forget I said that.

For those of you that don't know much, or anything about the Metal Men, click on that descriptive link and you'll find all you're looking for.

Now if only they'd get to work on a few other properties I would like to see...
Posted by Honor Hunter at 7:08 AM

"I mean, when it comes to Marvel, who would have thought "Blade" would have turned into such an entertaining film? Or even the new film that has... never mind. Forget I said that."

Are you teasing about that animated Marvel film again?

I have those action figures lol

I can see this being a lot like MIB. I hope it turns out as good.

Like Marvel with pretty much all the Avenger-related films and Nolan with Batman, DC just needs to find the right team to make the films. That's the key: Put people who actually love the comics in charge. Why is that so hard for the studios to understand?