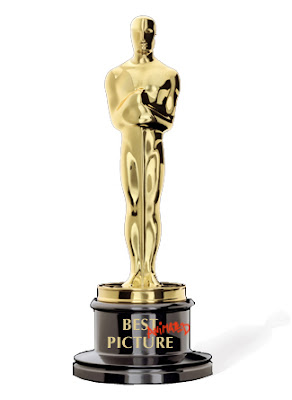 The New York Times has an article about the problem the Mouse has regarding "Ratatouille":

"As the awards season heats up, the Walt Disney Company and its Pixar Animation Studios unit have been wrestling with a conundrum posed by their warmly received, computer-animated fable about a rat who aspires to become a Parisian chef: Any move to promote it as the year’s best picture might lead to ballot-splitting that would diminish its chances of getting the less prestigious but more easily won Oscar for best animated film."

This is another case of the Academy diminishing the art of animated films and how they shouldn't be considered for best picture since they are, after all... animated. Thus, they need to be subcategorized in an inferior award. This all came about years ago because "Beauty and the Beast" got nominated for a Best Picture and some in the AMPAS didn't feel a cartoon film deserved it, so they created the special category of "Best Animated Film"...

I've heard Brad Bird talk about this, it's a real shame when Oscar thinks that animation is a second class citizen in the world of film. Just as comedy never really makes it onto the Best Picture nomination list, animation gets to sit in the back of the bus because of a bunch of high-brow Hollywood types that think they know how to define what culture and class is.

This isn't something new, Walt Disney was never really treated like an equal when he was doing his shorts. He was laughed at when he decided to create the first feature length animated film, "Snow White" and many were skeptical about his entry into live-action because he "made cartoons". While times have changed, there is still enough resistance to the idea that the medium doesn't define art... the art is defined by the results. It shouldn't matter if it's live-action, animated, comedy or drama... tell that to an out of touch Hollywood. Tell that to the producers and moguls that run these companies. Tell that to a public that seems to be at odds with a entertainment industry that doesn't seem to know where its bread is buttered.

"The studios’ reluctance to advance their animated wares as candidates for best picture is enforced by a perception that actors, the academy’s largest branch, with about 20 percent of the membership, are reluctant to honor movies without live performances. Additionally, the academy has a definite allergy to family fare, like the G-rated “Ratatouille”: 28 R-rated films have been nominated for best picture in the last 10 years, while only two PG-rated movies — “Finding Neverland” and “Good Night, and Good Luck” — have. And none with a G rating have made the cut."

It seems if a movie makes money, is made for the entire family and also happens to be animated, well... that's three strikes for that film. Very sad.
Posted by Honor Hunter at 9:44 AM

Honor, there is a completely different way to look at this issue. The existence of a Best Animated Feature category GUARANTEES that many cartoon films are recognized every year as nominees and that one will inevitably be able to call itself the award recipient. I see the invention of this category being more self-serving to the Marketing Departments of the 90's-era studios than it was a snub by live action performers.

So this problem exists, and it is very fair to point out how it works against exceptional works like Ratatouille. Still, from a very pragmatic perspective, what are the chances this film would get nominated, let alone win the Best Picture nod? Further, how many future films (those that come up a bit shorter than this Bird film) would be doomed to receive no recognition by Oscar if there were no animation category?

If I understand the Academy process correctly, the studios select the categories that they offer films "for consideration" by Academy members. If Disney solidly commits to the idea that this is a Best Picture--they should NOT offer it for consideration in the Best Animated Feature category. The film is out on DVD, so it is not like they are waiting to stamp some "Academy Award Winner" stamp on the thing in order to boost pre-orders.

the MPAA doesn't run the Oscars, its AMPAS (the Acadamy of Motion Picture Arts ans Sciences)