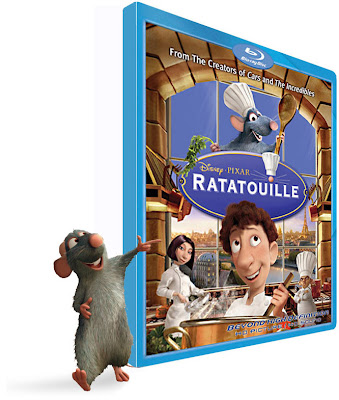 The Mouse released the Rat last week on Blu-Ray and DVD and boy did it find the cheese.

Remy made $7.6 million for Mickey. A figure large enough to surprise many a critic that thought the film was just a kid's picture. While "Ratatouille" was number three on the DVD charts, it was at No. 1 on the Blu-ray Disc chart. Thus, another shining example of the poor performance of Pixar films since the Walt Disney Company purchased the small Emeryville company.

I wonder if Iger is regretting the purchase?

The Mousetro's power grows... good things lie ahead.
Posted by Honor Hunter at 7:28 AM

the Hollywood Reporter (through ComingSoon.net) actually states that Ratatouille is #1 in Blue Ray & Dvd!

Way to go Ratatouille, we all knew you're a true jem that shines stronger every passing day!

Damm, once again you just HAVE to prove Jim Hill wrong.

Please, Jim Hill's articles these days pale in comparison to your blog posts. Don't stoop down to his level. We get it, Jim's wrong after his claims against Ratatouille and the PIXAR decline and you are right... he hasn't said anything about it since the numbers have gone up.

Hmm, he also DID call this blog up by saying that you only post on the "sunny, positive" side of Disney, which is kind of true- I think you need to be more critical, but not too much.

The only thing that concerns me is the stock prices have fallen over 7 percent this year.. stocks in general are down this year but its something to keep an eye on

Interesting, you say "another shining example of the poor performance of Pixar films since the Walt Disney Company purchased the small Emeryville company" But wouldn't these feature films have been in production long brfore Disney took over, not realy sure you can blame disney for that.

Who's the big cheese now, Mickey or Remi? (Don't tell anyone, but I'd rather hang with the rat...)

>>>Interesting, you say "another shining example of the poor performance of Pixar films since the Walt Disney Company purchased the small Emeryville company" But wouldn't these feature films have been in production long brfore Disney took over, not realy sure you can blame disney for that.<<<

He was making reference to Jim Hill's claims that PIXAR is on the decline.

DATELINE HOLLYWOOD; Sat. July 1st, 2047 -
Animation World Leader, Pixar, has announced that its 2007 release of the movie, "Ratatouille" has just raked-in another $76.00, in "Digi Disk" sales! Some 40 years after its original release, Pixarians around the world rejoice with every dollar the Brad Bird film earns.

But, instead of enjoying the films success on its merits, they still chose to direct their negative energy and taunts towards Tonight Show host, Jim Hill, (a former small-time internet blogger), who was made famous after his early predictions of the "Rat" film were off by over 25 million dollars!

Hill, recently, in part to flaunt his power and wealth, purchased Disneyland Paris. This rise to prominence, was based on the never ending notoriety he's enjoyed over the years, simply because he dared not march in lock-step with others in his field. By underestimating the "Rat"movie, Hill was, and still is, mocked relentlessly for his "brazen" reporting...to which he says, "bring it on...I need another Bentley!".

To which I say...will we ever hear the end of this?

Oh, other than this petty issue...love the site.