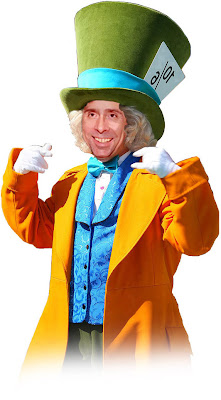 Tim Burton will be directing a live-action/motion capture version of "Alice in Wonderland" after he finishes "Sweeny Todd" according to today's Variety.

It's all part of a two picture deal that Oren Aviv, Walt Disney Motion Pictures Group's Head Suit put together. The script for the Alice remake/redo was written by Linda Woolverton("The Lion King," "Beauty and the Beast") with Richard Zanuck, Joe Roth and Suzanne and Jennifer Todd producing. Filming will begin at the beginning of the year and wrap in May.

Once "Alice" is in the can, Burton will direct and produce the full motion picture adaption of his 1984 short, "Frankenweenie". That picture will be done old style in stop-motion like Burton's "The Nightmare Before Christmas".

The Mouse is really cozying up to Burton it seams. Personally, I look forward to "Frankenweenie" more than a remake of "Alice"... although I did enjoy his "Sleepy Hollow" remake. I wonder how Johnny Depp would look as the Mad Hatter?
Posted by Honor Hunter at 8:15 AM

I'm not sure how excited I am about this. I don't really enjoy Tim Burton's stuff much. I was a little disappointed at the Nightmare Before Christmas treatment of Haunted Mansion. Oh well - I'm apparently a minority.

i can't express how psyched i am about this!

now i just wish i knew who'd be doing the voice of the cheshire cat (one of my favorite characters of all time)...i'm assuming he'll be CGI?