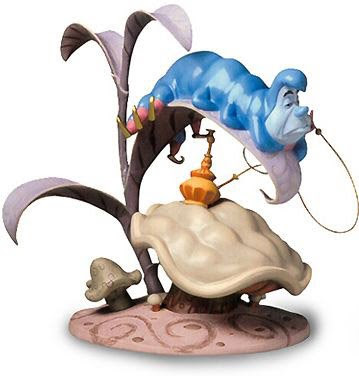 Something which never was or is no more: "Nevermores"...

In light of Disney's decision to ban smoking from its films I thought we should go back and examine what characters in classic Disney films have actually used the dreaded weed, tobacco. Disney's new edict got me thinking about what wonderful villains and other characters we would be deprived of if this kind of PC mentality had been in place fifty years ago.

The most obvious character I can remember is Betty Lou Gerson 's voice work as Cruella De Vil from "One Hundred and One Dalmatians". Remember her prancing around in her gaudy fashion outfits puffing on that cigarette?

Or what about the Richard Haydn's portrayal of the Hooka smoking Caterpillar from "Alice in Wonderland" ?

Some of these people dislike smoking so much they consider it a sin almost... maybe they're right. After-all, look at James Woods version of Hades in his underworld from Disney's "Hercules"... yep, that's right. He's a smoker. Nothing like making a villain without any vices... what an exciting bad guy he would be if you were to take away all that you hate about him.

There are others I can think of, but I'll leave that up to you.

What characters can you remember that smoked in Disney films? Now they don't have to be from an animated film. It can be live-action if you want. So put your two-cents in. What characters would we never have seen had Walt put this policy in himself? I know some of you will want to bring up the fact that Walt was a smoker and hid it from the public, that he died of it... but I'm not of the belief that people need a company to hide all the bad things in life from them. I also don't believe that a company should be making those kind of decisions for you.

So tell me... what or who would we have missed, had Walt Disney Productions had this policy in place during the Golden Age of Disney Animations?


Hat Tip to reader Greg for his suggestion for this article.
Posted by Honor Hunter at 2:20 PM

The great irony of the Pecos Bill debacle is that while they digitally removed the famous cowboy's cigarette in the video/DVD release of Melody Time, Jose Carioca continued to puff away on his cigar in the same film's Blame It on the Samba sequence.

Donald Duck was also known to light up in quite a few of his shorts.

Why does Disney have to be so PC?

There were smoking in "Pinocchio".

doesn't Peter Pan smoke a peace pipe with the indians? (yeah, I'm probably wrong on this). And I think the villian in The Rescuers smoked.

What about drinking? Considering that Dis just pulled their Ratatoille/Costco wine promotion, how does that affect the 'Linguini gets drunk' scene?

well, yes, Peter smokes the peace pipe, but the "smoking is bad" message gets across when the Darling kids try it, along with Wendy's blatant snubbing in front of them.

Pinocchio too would get away with it because it showed (perhaps artificial) consequences - the smokers turned into the donkeys. smoking makes one an "ass".

as for *comedy* that couldn't have been done under this new ruling: there's a hilarious scene in Apple Dumpling Gang where Tim Conway, trying to light a cigarette (self-rolled, I think) accidentally lights Don Knotts's butt on fire!

In the Mickey Mouse animated short, "The Brave Little Taylor", the giant actually rolls up a haystack (or something like that), says "SMOKES!!!" and lights it with a chimney and puffs away.

I'm 16. I've been raised with morals and a good character. Personally, Disney is the best company ever, and them banning smoking makes them even better.

Smoking is a vile and sickening habit, thankfully Disney recognized this. Children see the movies, and see it as being "ok," I can totally understand this.

And as for all the films that had smoking in it, when all those films were made, not many were aware that smoking caused cancer you retards...

the funny thing is, when i heard this, i thought all the little sick smoking people would cry out saying exactly what you guys are saying, but if you could stop, i'm sure you'd want to. It lowers your personal value. eew.

Murder is bad too... should Disney ban that from it's films?

I mean, Children see the movies, and see it as being "ok," I can totally understand this.

And just because someone is against banning something doesn't mean they are smokers themselves. I don't like it, but I'm not going to tell others what to do with their lives or how they should live their lives. I believe that smoking is an incredibly bad habit, but I don't think that it reflects that much on character. There are people in this world that are great champions and heroes that smoked. People have faults, but smoking doesn't mean they have less moral character. It does mean they're human. Everyone makes mistakes, everyone has vices.

It's not the smoking that created the bad character.

Just don't force it upon someone else. I've got a mom and dad and I trust them to give me my moral character. I expect them to give me direction. I expect when I see bad things in life for them to give me the proper context of what I'm seeing. I don't expect to pretend something doesn't exist or rewrite history like Disney did by digitally taking out cigarettes in cartoons.

You're 16, you're still young and I hope you learn a great deal more about life before you turn 18 and try to force your views of how I should live my life when you go vote.

"If you want a company to play the role of your parents, fine. If you want the government to play your parent, fine. Just don't force it upon someone else."

I always have thought this is a stupid argument. Where do you draw the line? Under this way of thinking Disney movies could include sex, drugs, and extreme graphic violence. Parents should then decide whether or not to let their children watch. How dare Disney does our parenting by not including these things!

When parents bring their children to a Disney movie they expect none of those things mentioned above to be included. They don't have to go watch the movie in advance to check. Now parents will know that smoking is not included. Society changes, so should Disney's values.

I don't think that they should edit smoking out of old movies, but not including it in new ones is no problem IMO. The one exception I can see is showing it in a negative way, as in, the consequences of being a heavy smoker.

Sincerely,
A different and not as young anonymous

If Disney were to make characters that portrayed the smoking as an attractive image I would understand and agree, but would you really want to bad Cruella De Vil from smoking? I don't think Hades smoking made me want to take a drag on a cigarette. I just think there is a point where we take it too far. We both agree smoking is bad, but some of us don't want to pretend it doesn't exist. That's where parents come in to the equation.

I'll be scarred forever by that Donald Duck short where he found his nephews with a box of cigars and made them smoke the whole box... only to find out that the nephews had gotten them as a gift for Donald.

Yes smoking is bad. But censoring it from TV and films will NOT stop kids from smoking. there are thousands people who walk down the street every day and smoke in front of kids. You cant do anything about it. when cartoons put tobacco in a character's mouth, it is usually symbolism. Rich Fat Bosses with cigars in their mouths, the rich with fancy cigarettes, emphasizes the poor who smoke, peace pipe tells about history, etc. When I saw this on TV, I didnt want to smoke, it just made me understand better about the character without any dialog. This also applies to death, booze, and other things. Dumbo got drunk and taught us a valuable lesson on if you drink, scary pink elephants will attack you. Basically, banning these things from children viewing networks isolates the kids from real life. Its not the company's fault that the kids started to smoke but the parents who didnt teach the kids that smoking is bad or shut off the TV when an inappropriate movie started to play. We should all learn from Sesame Street when they taught kids about the death of Mr. Hooper. Besides, if you show kids a sad episode about the effects of negative events like the effects of smoking and drinking and drugs, then the kids will grow up remembering that when they were kids, that episode about drinking made them feel bad which will prevent them from drinking in the future. Or in great amounts. Its all psychiatry and the sub conscience, companies should use that instead of taking the jobs of parents. Parents should do their part,take some free time and talk to their kids. DO SOME FUCKING PARENTING AND STOP BLAMING TV/MOVIES. This is SO similar to when the Washington Wives tries to ban Rock/Metal music because it 'causes' violence. CENSORING IS AGAINST FREEDOM OF SPEECH. BY PREVENTING WRITERS FROM WRITING SCRIPTS THAT INCLUDE SMOKING TO PORTRAY ART IS WRONG!!! FREEDOM OF SPEECH! It is kind of ironic that Walt Disney was a heavy smoker.