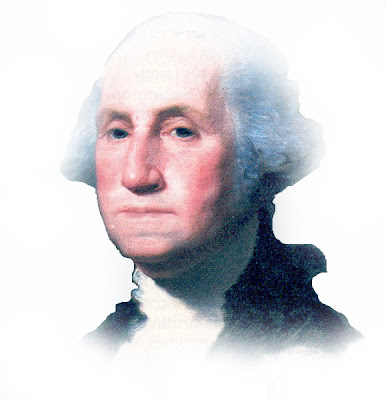 I know those words draw to mind an image of Marilyn Monroe singing to a slightly blushing JFK, but this post is to celebrate George Washington's birthday. Walt Disney understood the importance of knowing our heritage and it's why he had such an enthusiasm for American history. It's also why he was able to educate people about things like "Great Moments With Mr. Lincoln" and didn't turn it into a list of dates and numbers boring everyone.

The first president of our nation was born on February 22, 1732 in Virginia and grew up to lead our nation through it's own birth and help establish many of the precedence that we still use today(an example is when each president says: "So help me god" while being sworn in). He was a tall man for his time(over 6 feet) and a towering presence over the men he led. It's impossible to picture the country we now live in even being here were it not for the great sacrifices he made for America during the Revolutionary War, his Presidency and even afterward. Washington was out surveying his property one morning near the beginning of winter when it started to snow, which then turned to sleeting rain. He wasn't prepared for it and continued about his journey around his farm. When he returned later that evening to Mount Vernon he didn't bother to change his wet clothes and unfortunately became very sick with a bad cold. It developed into a severe pneumonia. The medical doctors of the day were not so blessed as the ones we now have(leeches were used to try to heal him) and he passed away on December 14, 1799.

We are all better today because of him...
Posted by Honor Hunter at 6:53 AM

I want to thank you for honoring not only Disney on your site, but all that was important to him as a fellow American.

Wow...I had no idea that's the way George Washington died. Where was the Mother of the Nation to tell him to get in outta the rain?

Thanks for the compliment anonymous... I'm a proud proponent of "American Exceptionalism".

Well, Aracuanbird, he was a tough, stout man... a little rain wouldn't be enough to keep a man that fought in blood drenched battles from riding around Mount Vernon.

Another great post...truly in the spirit of Uncle Walt.

Washington certainly was the "indispensable American" (along with Lincoln).