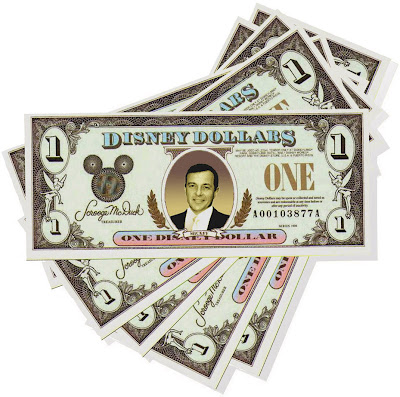 Well, it appears the Mouse has beat the Street...

Wall Street that is. Reuters is reporting that the Walt Disney Company's profits outpaced what the analyst had predicted. Despite a downturn in the economy the Suits at the Mouse claimed to be optimistic.

Walt Disney Company shares rose 5.5 percent in after-hours trading based on the results. The stock's rise offset a 2.7 percent drop in regular trading.

The writers strike didn't appear to hurt the bottom-line of the Mouse.

Disney saw the benefits from a weak dollar, which has most Americans vacationing at home in Walt Disney World and Disneyland and more international tourist came to the American parks to take advantage of their currency's buying power.

Net profit dropped to $1.25 billion from $1.7 billion in comparison to the same quarter last year(which is misleading because more revenue was generated last year by the sale of Disney's interests in Us Weekly and E! Entertainment).

The Street was expecting a return of 52 cents a share but the company had earnings of 63 cents per share.

The consumer products division had a 29 percent revenue growth in the quarter.

Disney's movie studios, with releases like "Ratatouille","National Treasure: Book of Secrets" and "Enchanted" in this quarter, saw flat revenue and a 15 percent drop in operating income(again, misleading because of the comparisons to last years DVD sales of "Cars," "Pirates of the Caribbean: Dead Man's Chest" and "Little Mermaid").

Profit at Disney's theme parks and resorts rose 25 percent to $505 million. The theme parks had a record holiday attendance and consumer spending at Walt Disney World in Florida was far higher than expected.

International bookings are slightly ahead of this same time last year.

As a result of the strong earnings and cash flow, the Mouse plans more share buybacks and has already repurchased $1.5 billion of Disney stock this year.

Now after that, who wants to say Bob Iger isn't practically perfect?

(Just so there is no confusion... that last comment was a joke.)
Posted by Honor Hunter at 6:16 AM