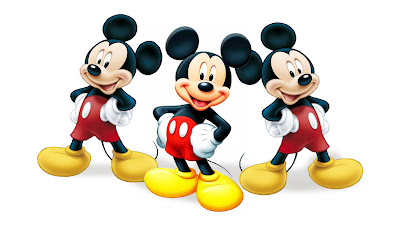 Most people probably know who the mouse is. He's been in the public eye sometime now, but most people don't know much more than that. For instance, most don't know the voice.

Or voices I guess would be better to say. The men who lent their voice to the little mouse that built a company. Oh, I'm sure some of you... quite a lot of you would be able to figure out the first one that did the voices. It's been drummed in our heads in all the company's media chronologies of Mickey.

That first falsetto voice was of course, Walt Disney. But who was the second? A few Disney Geek/Fans would get that, but how about the third? Not many I'd bet...

When Walt began doing the Mickey Mouse cartoons they were silent. It was the third cartoon he created "Steamboat Willie" that brought about sound in a cartoon, but it wasn't until "The Karnival Kid" that Mickey finally had a voice. Walt provided it since he was so intimately involved in those early works and it was one less person he'd have to pay. Not to mention that the personality of the Mouse would evolve into a variation on the man himself. Walt did the character's voice all the way up into the mid 40's. By 1946 Walt's growing empire was taking up a great deal of his time and he didn't have enough to continue doing those famous vocals.

Enter James "Jimmy" MacDonald. A drummer and sound effects artist that worked for Disney. He got called in to talk to Walt one day and was asked if he knew how to do Mickey's voice. He did it for Walt and well... Disney had a new live-action/animated film coming out the next year called "Fun & Fancy Free". It was Mickey Mouse's second feature(the first being "Fantasia") and had a segment in it called "Mickey & the Beanstalk". This was to be Jim MacDonald's debut as Mickey Mouse and no one noticed. A year later, in 1948, the first Mickey cartoon short featuring MacDonald "Mickey's Down Under" comes out. He continued to do the voice until he retired from doing the voice in 1977...

That's when Wayne Allwine, ironically another sound effects editor and a foley artist for Disney takes over for Jim as the voice of Mickey on "The New Mickey Mouse Club". Wayne then makes his first appearance as Mickey in the 1983 featurette "Mickey's Christmas Carol"(which was the last time Clarence Nash voiced Donald, btw). He's done the role for everything from video games to television shows ever since. Another strange twist is that Allwine is married to Russi Taylor, who happens to be the voice of Minnie Mouse.

And a fourth voice? Well, Wayne has done Mickey longer than Walt or Jimmy and he's still going strong so there are no plans to replace him anytime soon(Hopefully if Eric Goldberg's new short gets greenlit we'll see Wayne do the voice for Mickey in his first teaming with Donald and Goofy in decades). But eventually there will be a fourth voice... probably someone in the sound department on the Lot. That'd be a nice way to continue the tradition of the three Mickeys...
Posted by Honor Hunter at 1:18 AM

Thanks for the article!

Actually, Carl Stalling did Mickey's voice in "The Karnival Kid".

Don't forget the other individuals did Mickey's voice for secondary projects in the 1970's and 80's (Jack Wagner in theme park parades and shows and the Disney On Ice shows, Pete Renoudet on various record albums and Les Perkins in a few TV programs and whatnot).

Does anyone know who does Mickey for TDR's shows and parades? It sounds different from others I've heard. Maybe it's just the more melodic sound that the Japanese language has.