At Disneyland, The Adventure Begins... 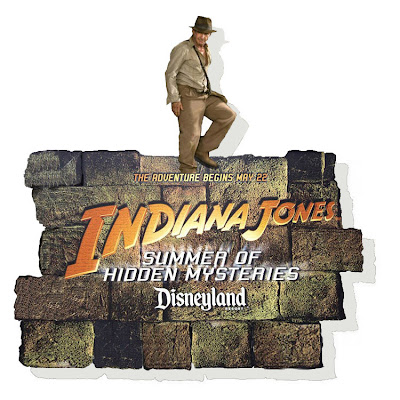 As well as the new Indiana Jones movie opening up on May 22, Disneyland will have a little bit of fun with the Man in the Hat as well...

If you happen to catch a matinee of "Indiana Jones and the Kingdom of the Crystal Skull",(which is a great way to see a film based on serials, btw) stop by Disneyland and check out the entertainment the Mouse has for you in Adventureland. We mentioned "The Summer of Hidden Mysteries" in a previous BSA, but I guess a friendly reminder of what's coming is Ok. Ok?

Here are the details released:

"Indiana Jones™ and the Secret of the Stone Tiger"
Young Guests become archeologists as they solve clues, complete tasks and decipher codes, Indy style which leads to a hidden treasure. A friendly and helpful female archeologist, who may not be as innocent as she seems, will host the experience. However, if her intentions are found to be villainous, Indy will surely be on the scene to aid the youngsters.

Indiana Jones™ Adventure Map
Guests will be able to pick up a special map near the entrance to Aladdin's Oasis, leading them to a series of clues that, when deciphered, reveal a secret message. This message can be used online to obtain an exclusive download of desktop wallpaper, screen saver or other collateral. The map also has a section that highlights activities in the queue of Indiana Jones™ Adventure and the Jungle Cruise.

Adventure Photo Location
Guests can step into an action-packed sequence inspired by Raiders of the Lost Ark. They can also pick up their Indiana Jones™ Adventure Maps at this location.

Jungle Cruise
The Jungle Cruise Skipper spiel has been enhanced to reflect the idea that Indy has been traveling through the jungle on his latest expedition – and we will signs of his exploits. Moreover, Guests with a keen eye can look for hidden icons from the first three films, which are described in their Adventure Maps.

Indiana Jones™ in Adventureland!
Indiana Jones™ and a male enemy agent run into each other in the street and pursue one another through Adventureland – pushing through the crowd, popping up here, there and everywhere! Seems one of them has a map to the Temple of the Forbidden Eye that the other wants. This results in a series of fun-filled, dramatic staged "moments" that include fights on balconies, pursuits and daring escapes!

Mark it on your calendar...
Posted by Honor Hunter at 8:18 AM

I'll be there the following day. Woo hoo!

This should be a great addition - stunt show with some interaction!

Hey, you added more info! Thanks!