The Shape Of Things To Come... 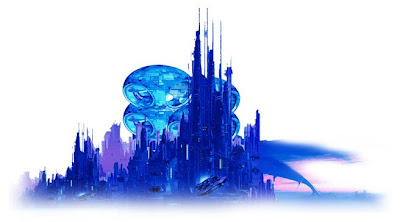 "The best way to predict the future is to invent it."

You arrive at the gates of Disneyland ready to ride all your old favorites and the new ones that have been blared in advertising all over the place. As you go through the turnstile you're amazed at how light the crowds are. You're also curious that all the tourist are dressed the way you would like them to be instead of the normal traveler in a shirt too small. You brush it off and start walking toward the berm. A lovely park CM smiles at you and asks if you'd like to take a survey. You brush her off and nod as you walk under the rail road tracks and head down Main Street U.S.A.

You smell the air. The fresh aroma of sweets and other foods make your mouth water. Looking around you realize how vibrant the flowers are, how sweet they smell, how clean the streets are, how... perfect everything is.

And not a custodial worker in sight. Walking toward Sleeping Beauty Castle you take in the lovely view of the buildings. The lights you remember being on the roof as a kid are no longer there. The street seems wider than it used to. Either that, or perhaps the smaller crowd makes it seem so. As you get in front of the castle you suddenly realize that you'd like to take a picture. A tap on your shoulder...

Another friendly CM smiles at you and says: "Where would you like to stand, sir?" You smile and point to an area perfect for a framed photo. You stand on the exact spot and flash your pearly whites as the CM says: "Say Mickey!" Once the flash is over he smiles and walks away. You start to go through the castle but stop, something is wrong. Something isn't quite right... You look up into the sky and say: "City Hall?"

A kind and soothing voice purrs up: "Yes, Mr. Hunter? How can I help you?"

Looking around you say: "I really think the park is too sparse... could you put more customers in here, it just doesn't feel right."

City Hall: "I'm sorry for any inconvenience, Mr. Hunter. I thought you requested a light crowd today." A moment later: "How's that?"

You look around and notice that there are now quite a few more patrons, almost double in fact.

Just then the slow, humming sound of a phone pipes in. You wave your hand and motion...

"City Hall, I'm going to have to take this call. I'll return shortly."

You notice a holographic tachometer appear next to you that reads... "Twenty-three hours remaining left on One Day Pass. Click here if you'd like to extend your stay."

Everything beautiful around you fades to black. You click your phone and answer it: "Hello?"

And so would be a typical experience to the Disneyland park you may enter in the future. This would be a "true" Virtual Magic Kingdom. But is it just around the corner?

Of course not! But it may be what you could expect to experience when Tony Baxter's Tomorrowland 2055 becomes just another year in the park. It's far off, but it's not far out.

In the meantime there are plenty of technologies that WDI and the Mouse in general are working on to make you wonder how they did it. You've seen the demo of the new Mr. Potato Head and several other new interactive attractions. The new AA's in the Cars Land area will be some of the most advanced Imagineers have ever come up with. Some capable of truly, mesmerizing qualities. Several of the "E-Tickets" that the Mouse will come out with during the next decade will show how technology has changed/evolved/advanced in telling a story.

I know some of you bemoan the inter-activeness of TSMM and I've got bad news for you... it's going to increase. There will be more technology used in attractions and everything in general to provide a more immersive environment. Does this mean that we'll no longer have any passive attractions like "Small World" or "Pirates" or "Haunted Mansion"? Of course not. There are several things WDI is working on that involve these types of experiences, but the (Disney)world we'll live in will be one in which the guest play a more active part.

Think of the Muppets attraction that was at DCA a while back or the PUSH character that roams around the Golden State area of the park. Sometime early next year well see a much more advanced version of this as these and much more detailed characters(from both films and original) roam about the park interacting with guest. I'd say based on the success of a certain film later this summer we can expect to see a prototype character out and about in Tomorrowland quite soon(ahem).

Lasseter is really trying to change the culture of WDI so that it works on fostering creativity and not fostering paranoia about whose getting fired. It's a hard job, but he knows it will take time to undo the structural chaos that Michael Eisner built up to have Imagineers fighting with one another. Many of these projects are team projects used to foster a collective sense of pride in creating something... this is a feeling that WDI hasn't had for the most part since the early 90's. We may be seeing the early, low hanging fruit of some of these projects in a year or maybe two, but the vast majority of these new design initiatives that will keep Disney ahead of other parks won't be seen until early next decade. 2011 anyone? I know, I know, saying that makes some of you go bonkers... but it's true. More like 2011/2012 or 2013 is when these things will really start to flow and transform the parks. By then Lasseter will be deep into his ruling of the Glendale Kingdom and if the choices he's made as Mouse Animation Czar are good ones(read: lots of moola) then he'll have an extremely large amount of autonomy within the company. Not only animation or Imagineering, but consumer products and live-action as well(but that's another story for another day). I'd venture to say that should things go well, John Lasseter will have the most power of any Disney official since Walt himself. Iger will be running the company of course, but the stock holders will be very lenient on Lasseter should his golden touch from Pixar rub off on the Mouse and Iger knows this...

But don't fret about these plans should they come about... Bob Iger and John Lasseter aren't trying to remake the world, just stay up to speed with it. To be relevant and dominate entertainment. As we move into the 21st century the taste of guest change. I can say I would have never thought I'd see certain things at the parks. Some films/rides don't appeal to my demographic. They're simply not for me, but my taste don't have to be catered to exclusively in Disney's global strategy.

It's a big enough small world out there for you, me and many, many others. Just realize that it's a bright enough future to sit back and welcome what is awaiting us...
Posted by Honor Hunter at 2:12 AM

I think you mean "chronometer" and "lenient."

Thanks, but a "tachometer" is what I intended to say, "leaniant" on the other hand was not... so thanks for that one.

WDI must do better than this.

In a Virtual World, I do not want to be in Disneyland. What make them think Disneyland is a good starting point for a vitual world? Virtual worlds should be beyond anything we imagine now and certainly beyond the brick and mortar Disneyland.

I work in media, and the other day I walked into work and saw an actual robotic Wall-E rolling around. They had brought it in for a demo, and it was amazing!

I hope you're right about all of this. It's great to see positive things happening in attractions, parks, and especially the WDI atmosphere. Creativity needs it, and Disney will stay ahead of the competition, only if it really changes to this way of working.

I don't think the idea is to make Disneyland a video game, but to involve some aspects of video games such as freedom, interactivity and the ability to affect the world.

Right now, it seems like the focus on better immersive experiences is technology. I think we will soon see a shift of the pendulum back to the middle so that sets, lighting, props, architecture and storytelling play a much bigger and better role.

I feel that Toy Story Mania has just been "themed" because the focus (energy and money) was more on the technology. It IS technology for technology's sake, even though WDI states the opposite.

TSM seems to have taken a weird step backwards though in terms of immersive qualities....I know it's in 3D, but Buzz Lightyear (the original "interactive" ride) does a much better job of immersing the guest in an environment and keeping them there. TSM breaks so many rules and shatters the illusion so much that it just becomes about technology.

Tony Baxter's idea is more about this idea of immersion. I think he likes the idea that you could explore a world and go anywhere you want, and the idea that an environment and it's characters are never the same every time you see them. Do they change because of you and your involvement in the environment? Perhaps that's the true lure of video games, not the actual "game" part it.

Wait a minute, you've riden the ride already? I didn't even know they were doing cast member previews yet. If you haven't been on the ride what you're saying isn't really worth my time because you are judging it before it is even seen by most guest.

All this talk of immersiveness and interactivity sounds great and all, but if it's just TV screens and 3D glasses, count me out.

You know, one of the complaints about the Star Wars prequels was that everything had a plastic look to it. This is because everything was in CG and almost every shot was filmed in front of a green screen. The original trilogy feels more organic, more real in many ways because it used actual sculpted models.

That's what these rides with digital projection screens and stuff feel like to me. They aren't as organic as say, Pirates or Mansion.

I still claim that the Haunted Mansion is the pinnacle of Imagineering. Even if the animatronics are a little jittery and some of the effects are outdated, it feels much more intimate, more organic, more robust, than Nemo or Midway Mania.

Midway Mania and Buzz tout interactivity, but I feel more like an active participant in the Mansion than on Buzz, and I predict Midway Mania will be the same way.

You just don't know when to quit, do you, Spokker?

Having been on Midway Mania quite a few times, I have to say that from the effects to the sound to the design of the set, TSM is one of the most creative and brilliant attractions that I've been able to enjoy. The outdoors effect that you experience in Pirates is present and that just adds the perfect tone of summer-night-fun that you'd expect at a midway. I think that TSM is a great look into the exciting things to come. Can't wait to see what the public thinks!!! I feel like trusting imagineers is a confident descision.