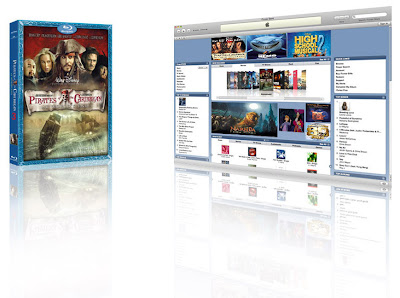 Shall I put it into a doggie bag for you?

Ahhh, such is the march towards customization, personalization and integration in this ever-expanding American economy of ours. Not only do we want it now, but we want it our way(my apologies to Burger King).

And leave it to Apple to add one more item to that menu.

It was announced without a great deal of fanfare(by Apple, at least) that it would start selling, not just renting movies and allowing you to purchase them on the same day they were available for purchase at big-box stores(Wal-Mart, Target, Best Buy, ect.). All of the majors including the Mouse are on board... it's no surprise that Disney is hooked in with Apple on this deal as Iger and Jobs have had a very sybiotic relationship since before he became CEO or purchased Pixar.

Companies such as the Walt Disney Studios, 20th Century Fox, Warner Bros., Paramount Pictures, Universal Studios Home Entertainment, Sony Pictures Entertainment, Lionsgate, Image Entertainment and First Look Studios are all involved in the deal... and trust me, this is a very big deal.

Developing...
Posted by Honor Hunter at 8:58 AM

Um, maybe I'm misreading what you wrote, but Apple sold movies on iTunes (specifically Disney first) before the rentals began...

The new news is that you will now be able to buy the iTunes videos the same day that the DVD is released...

You are correct anonymous, they did sell movies before this, but not by so many companies. Many of the major studios held out and wouldn't let Apple sell there movies because they didn't like the pricing structure that Steve Jobs was trying to get them to use. It looks like they've came to an agreement and it will allow Apple to become an even bigger player in the retail market of entertaiment. Even though they will have a loss on each sell of each film.

Steve Jobs is a very smart and sneaky guy...

It'll be curious to see what iTunes looks like by the end of the decade.

disney.com works perfectly fine for me in Safari. I'm running 3.1.1.