The Wonderful World Of Disney Shareholders... 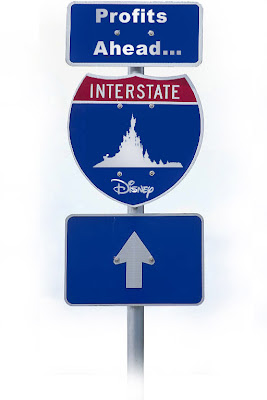 The Walt Disney Company released the results of its second fiscal quarter today...

What did it say about the Mouse? With fears of the economy in a downturn, some analyst feared the results would be dour or weakened.

Iger and Co. stunned Wall Street with impressive quarter growth that was well beyond what was expected. Among the highlights:

The Walt Disney Company's net income was up 22 percent on revenue which rose 10 percent to a hefty $8.7 billion.

$1.1 billion in net income for the quarter.

11 percent rise in revenue from last year to this year for the parks and resorts division with $2.7 billion.

Operating income for the division increased 33 percent to $339 million.

Iger stated that the parks have been "resilient to date." despite the economic problems.

Disneyland Resort Paris has been experiencing an increase in attendance, boding well for expansion in that park over the next few years(my emphasis, not theirs).

Walt Disney Studios operating income was up 61 percent to $377 million on revenue that rose 18 percent to $1.8 billion.

Home entertainment was big as well with DVDs of "Enchanted", "The Game Plan" and "No Country for Old Men" doing very well.

Media networks operating income improve 14 percent to $1.3 billion on revenue that was up 5 percent to $3.6 billion..

Consumer products had 10 percent revenue growth to $551 million, while operating income that dropped 14 percent to $107 million.


Not bad... And we're now in a quarter that has "Narnia" and "Wall-E" coming up as well as the new Toy Story rides at DCA and DHS to help propel profits for this quarter. I wonder how many skeptics there are of the Pixar deal still around? I'm sure they're hiding in the shadows waiting for "Bolt" to come out this November and crossing their fingers hoping that it bombs.

Bolt is John Lasseter's first involvement with Walt Disney Feature Animation since the Pixar aquisition. There are those saying that the box office is telling if 3 billion dollars was worth it or not. Clearly they are ignoring the overall impact Lasseter and his crew have at the Walt Disney Company.

And if you knew what the environment was like prior to Lasseter... there would be no doubt how worth it it has been.

It's like an ocean liner. Once the turning process begins, it still takes a while to turn something this huge. But everyone will see a huge difference in quality with Bolt. (and it's hilarious!)

Honor Hunter, who is actually hoping that the movie will bomb? I don't doubt you, I'm just wondering where you are getting that sentiment from.

Even as a cynical fan I hope for the best for every project, and while I don't HOPE that any project bombs, I also call it like I see it.

Is there even enough information about Bolt out there to determine even on a speculative level whether it will bomb or not?