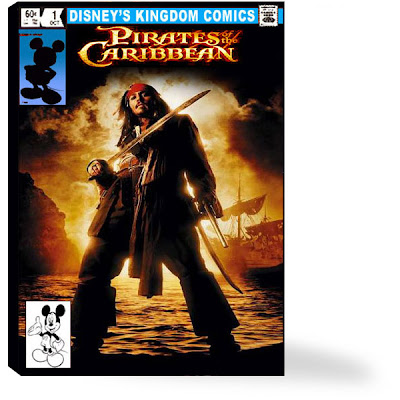 Walt Disney Studios has created a new imprint line called "Kingdom Comics" that will create new projects as well as reinterpretations of classic Disney live-action films in graphic novel form. The venture will be overseen by Ahmet Zappa, Harris Katleman and Christian Beranek. It's believed the line will also be the Mouse's attempt at creating comic book type creations that can then be plowed back into film or television adaptations. Essentially this could be seen as Oren Aviv's attempt to do an in-house version of what Marvel and DC have done with their creations(since Marvel and DC won't or can't be sold at this time). Kingdom Comics is supposed to announce a line up of writers and artists shortly.

It'll be interesting to see what they come up with... hopefully this won't go down in flames like the "Disney Comics" line from the early 90's.

does Disney still have its agreemnet in place with Stan Lee?

Awesome stuff. Hopefully they WILL make a Pirates comic...I'd LOVE to read the continuing adventures of Capt. Jack Sparrow!!!!

An interesting and developing story, I should point out that the announcement so far has been on graphic novels and not on ongoing comic series. The distinction, for those unaware, is that graphic novels tend to be single-volume longer-length stories that are bound more durably and can be sold through bookstores like a paperback book. Because of this, they tend to be a bit edgier and skew more towards adult audiences. An interview I read specified that while they can pull from the full library of Disney characters, the goal here is to pull out dormant characters and give them a slight tweaking or spin. Eventually they will also try out all new properties this way. Essentially, this provides a relatively inexpensive way to try out new ideas and see how audiences respond.

Oops! I inadvertently included an errant word. The sentence should read "Eventually they will also try out new properties this way" without the word "all!" A bit of a difference in meaning there!