Yeah, another DCA post lamenting the failure of the past... 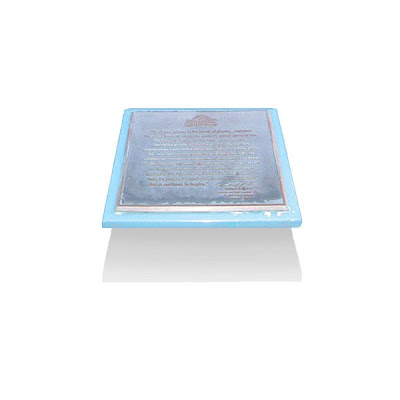 "To all who believe in the power of dreams... welcome!
Disney's California Adventure opens its golden gates to you.
Here we pay tribute to the dreamers of the past...
the native people, explorers, immigrants, aviators,
entrepreneurs and entertainers who built the Golden State.
And we salute a new generation of dreamers who are
creating the wonders of tomorrow... from the silver screen
to the computer screen... from the fertile farmlands to the
far reaches of space. Disney's California Adventure
celebrates the richness and diversity of California... its
land, its people, its spirit and, above all, the dreams
that it continues to inspire."

That was the original address to DCA that Michael Eisner delivered at the park's opening. Sounds totally like something you want to spend forty or fifty bucks on, doesn't it? I read that and just couldn't imagine how this man did not realize how totally out of touch had become with the general guest and average Disney fan. It's not that he hadn't done anything right before. For the better part of the first decade he did a great deal of good. Not everything, but most of what he did was smart and effective. The exact opposite happened the second decade he was there. I sometimes wonder what would have happened had Frank Wells not taken that helicopter ride. Perhaps he would have continued to been the balancing act to Eisner's hubris.

So let me take this opportunity to give an address for the new DCA in 2012. Let's just pretend that I'm giving that rechristening speech when Cars Land is opened and Phase One has officially ended:

"To all those that love the Disney name, what it represents and the meaning it has to California... welcome! Disney California Adventure represents to the world that Walt Disney saw when he stepped off that train to begin building his dreams. From the seaside of a Golden State that had already faded to the place where our company's first animated feature premiered, you will see and live those dreams. From the golden era of Hollywood, where this company's foundations were set to the great mountains of Yosemite, the myths of its native peoples, and the dreams that they brought forth. From historic Route 66 through which the path to California was not only a destination, but a world through which Walt let everyone experience the magic. The wonders that this land offered our founder helped us create this great company: the films, the parks and the experiences that it fostered. California offered to us a platform to construct a world; one which no longer exist, never was or someday might be. But one that could be dreamed. And when you walk through these gates, you will become entranced by it. Not only our past or present, but our future."

Ok, so it's a first draft, but it's better than the limp attempt that Michael tried to pass off as something even remotely interesting...
Posted by Honor Hunter at 6:12 AM

Perhaps you could write some of Iger's future speeches Honor?

To all the dreamers of the world. Welcome. Welcome to the land built by you. The ones who dreamed and followed those dreams. You are about to enter the world built by the biggest Dreamer of all. Walt Disney. California Adventure represents the land through his eyes. Building a legacy that started with his arrival 1923, take a walk through this truly Golden State, a Dreamers State, the one our beloved Walt Disney entered and transformed, for you.

Doesn't the Eisner bashing get old after a while? He's been gone for years now. Iger/Lasseter/Theme Parks is fixing the park. Perhaps focus on the great new rides. Maybe the Bothans can give you (and us) some tantalizing glimpses into the future?

I think he's just reminding us of the past. You know that phrase: "Those that forget history are doomed to repeat it's mistakes."

I think that article about the new front entrance was pretty positive and many of Honor's post have focused on the fact that it will finally be a Disney park in a couple of years.

Still, it's not bad to look back and make sure the offices in Burbank know that we expect better than what was given us. Come two years from now I have a feeling that there will be a lot less negativity towards DCA.

I just hope that Shanghai doesn't become the new whipping boy. This is Iger's first shot at a park, I hope he gets it right.

Sammy, do you mean they'll rip out Little Mermaid to put Golden Dreams back in? Disney is investing over a billion to fix it. They obviously realize they made a mistake!

I think a huge bump in attendance would seal the concept that building high quality, elaborately themed attractions will convince the Suits to continue to pour money into DCA, WDS and other parks. So I'm hopeful that will happen. I'd rather Disney put more money into existing parks than create substandard ones like what those parks were. If you're going to make a Disney park, make a DISNEY park. It's what we expect. If I want Knotts, I go there. Disney doesn't have to create a clone of it. Hear that Iger?

"Sammy, do you mean they'll rip out Little Mermaid to put Golden Dreams back in? Disney is investing over a billion to fix it. They obviously realize they made a mistake!"

Yes, they did, but I'm worried they're going to do it half-@ssed. I want to make sure they finish the Paradise Pier. They still haven't finished the stores over on the Midway. Sure, the games look nice, but the stores with their exposed beams and stucco look horrid. Then there are the other areas that we haven't heard anything about, like the Ariel's Grotto getting turned into that Princess Palace and those stores as well. And not only these projects, but practically all of Hollywoodland is untouched except for a new sign and tracks for the Red Cars. Disney better plan on this stuff for Phase Two if the crowds show up for all this stuff. DCA will be a lot better in two years, but they've still got some things to work on. I don't want the Execs in Burbank sitting back thinking they can relax after this is over. IT'S NOT. They've still got a lot of manure to clean up. And they had better do it.

Can't speak for them (but I will) -- I doubt the execs are going to call it day after 2012. But they are also running a business. Your point was I believe that 'those who forget the past are doomed to repeat it'. The past is present because although World of Color and other additions have helped, attendance is a fraction of what they projected. It's going to take time and I suspect mistakes will be made, and I'm sure the rabid fanbase will find something to be underwhelmed with. You're right though in that having an executive who is a visionary and a strategist (and a very good politician) will help to keep its evolution on track

That is one of the worse things I've ever read. A dedication isn't meant to go through land by land and explain the park (which ironically you have to do because otherwise the park makes no sense). It's supposed to briefly state the mission statement and then dedicate it to someone. The original was better.

I love it! Keep tweaking.

Gee, Bill....really??? Granted when it opened it wasn't the best park but I enjoyed it...in small doses.

"You are not the first to pass this way..... nor will you be the last. Step away! Be Gone!Disappear! Disappear! Back! Back!"

The address is a bit better than Eisner, but not by much. Cross out the Route 66 mention. Only historians care about Route 66.

Quote "California offered to us a platform to construct a world; one which no longer exist, never was or someday might be."

This statement is so ambiguous that I don't know what you really mean.

It sounds like the current budgetless California, a wreck of a state. California is a mess right now. There is no dreams except a nightmare. Let's not remind the public that California is a disaster zone.

No offense, but you were trying to hard... both with your dedication speech and with the post as a whole. Eisner's speech was fine. It was better than your's. It was the park that was the problem.

Eisner bashing will never get old as long as junk like the Muppets infest the theme parks.

Anyway, nice speech, Hunter. Let's hope the new DCA lives up to it.

Eisner bashing and dream speeches aside, the real question is, will they rededicate the park once they're transformed most of it?

Will we see a new plaque and a new dedication ceremony? What a way to fully announce to the public 'ok, we screwed up, we're fixing it'.

Honor Hunter Temporary CEO, that's a barrel of laughs. I knew you had delusions of grandeur but Jesus...

It was a parody you moron. He was joking if he was the CEO that day, hence the "temporary" title. I pity people born without a sense of humor.

Anyone who hates the Muppets has no soul. They are just heartless creeps.
To all Muppet haters; GO TO HELL.


Nice post. I am looking forward to DCA's continuing expansion.

Funny how EVERYONE thinks they're qualified to be a CEO...

Honor's is an improvement. J's is pretty good. But I like Bill's version of the dedication. Can get much more real abourt fantasy than that.

I would rather have a few of the posters here be CEO than Eisner, including Honor. I felt that when they finally booted Eisner, that they needed to level DCA and completely start over.

I'm still not impressed with what I have seen in regard to their current (as well as their pending) remedies for that still anemic park. Nontheless, I am a little hopeful that they do pull-off an actual fix.

Muppet lovers: You ever kiss a girl?

Carsland...CARSLAND????? Really??? The worst, most unimaginative name for a land ever...

It's Cars Land. Cars SPACE land. And I agree that it's not the most exciting, I know some people wish that it was Radiator Springs, but I feel since it takes place along it, that it should be called Route 66. That is what it represents. But even if it has a generic name, the land itself looks great and will be very, very popular.

Perhaps they could compromise and call it Route 66 featuring Cars?

Your address is better. But still, it points out that this park's theme is a mess. The theme of Disneyland works because it's abstract--the concept of Tomorrow or the concept of Adventure. The conceptual theme of DCA is a disaster because it's literal. Yosemite is a lame theme. Route 66 is a lame theme. Like someone else mentioned, the theme of Adventure is something everyone can relate to. The theme of Route 66 is, well, for historians and car geeks. That's the problem. And yes, the park can--and will--be better. But I doubt the identity of this park will ever be fixed.

Could someone please pass this over to the twenty-somethings at WDI? Concrete themes become dates and limit an audience. Abstract themes have the potential to become universal and relate to most anyone.

Or to put this another way: if you honestly can't think of a way to improve Walt's vision--and it's clear that, mostly, this is a problem for WDI--then just go back to Walt's version and figure out why it was successful.

(Or hire me to consult. I'm available.)