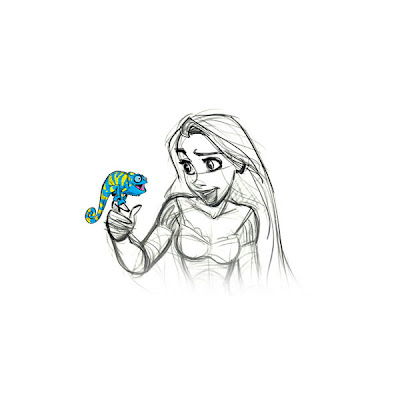 A second trailer has been released for Walt Disney Pictures' "Tangled" today...

It's far better than the first trailer, but still flawed in it's presentation. The film itself looks gorgeous, but the tone is far off from what you'll really see in the theater.

There's also a better trailer that was released internationally today. It shows a little bit more of the film and also shows a bit of the famous lantern scene that is supposed to look amazing. Judging by this clip, it is. My biggest complaint against this trailer, heck, all of the trailers for this film is the use of a rock song to try and make it feel hip. There is no rock song in this film, unless you stay through the credits and then you'll get the one that's tacked on. But the film and the music follow a more classical tone that these trailers would have you believe. All those that saw it at last week's press screening would agree.

November will soon be here...
Posted by Honor Hunter at 9:50 PM

Can't wait I read your posts all the time .. magnificent !

It's sad. I'm an animation geek, so I can't wait for this to come out. But after seeing the first trailer before TS3, my wife basically said "You're seeing it on your own." I hope a lot of people aren't thinking that because of these lousy trailers. Why not show the film for what it is??

P.S. Is that Ron Perlman I hear as the villain?! Yet another reason to see this.

Some wife you got there.

You know how in the old movies, remember how they are also famous for their soundtrack, like Lion King used African songs, then Can you feel the Love tonight, Prince of Egypt have When you Believe.. so on. People loved them.

Rather than using the pop musics then? Why don't they do the same anymore for Tangled? Are music so impossible to write for them that they rely on pop musics instead of coming out with new songs? I heard Tangled is a musical too, I really look forward to it.

According to IMDB, yes, that is Ron Perlman:

I hate the stupid jokes...

But I think I will love the Rapunzel character, she looks so cute. And this trailer is slightly better than the first one, so there still is hope :)

The Princess and the Chameleon looks good. Only Disney can do these.

I hope a lot of people aren't thinking that because of these lousy trailers.

I feel like I've gotten pretty good over the years at being able to tell from the trailer whether or not I'm going to like a particular movie. And if it weren't for Hunter continuing to tell me NOT to judge this film by its trailers, I really don't think I'd be planning on going. Even as it is, I think I'm going to have to wait a couple weeks to see if other people can verify his claims.

So far Disney has even to acknowledge to its English speaking customers that this is Rapunzel.

I guess kids these days are too stupid to want to read a book about Rapunzel. Why do that when they can watch pop song laden Tangled?

"It's far better than the first trailer, but still flawed in it's presentation."

Jeez Honor, get off your high horse. ;)
(I'm half-kidding, please don't take that as an insult. I love your blog)

They are just trying to put butts in seats.

You can't really blame them for that.
The competition has been absolutely FIERCE lately. Especially from Dreamworks.

Bolt and The Princess and the Frog were good, but sadly they did not get as much attention as they deserved.

I want to see Tangled and I want it to be successful, but do you really think that a film like Tangled will attract more people than a film like Megamind? Sadly, no way.

So you can't really blame Disney for trying to make Tangled seem hip.
Audiences are very discriminatory these days. Especially towards Disney Animation.
Partly due to the fact that for years (That's to that idiot Eisner) Disney animated films were sub-par.
But now under Lasseter's watch, Disney Animation has been making great films again like Bolt and The Princess and the Frog, and yet poor Disney still can't catch a break.

So, I really don't mind if Disney is making the trailer seem "hip" if it gets theater seats filled, then it works in their favor.

"I guess kids these days are too stupid to want to read a book about Rapunzel. Why do that when they can watch pop song laden Tangled?"

Uh, most kids ARE too stupid to read a book about Rapunzel.

All most kids want to do these days is text and use their ipods to listen to loud music.

You can't blame them for trying to attract people considering that Disney Animation just can't catch a break these days.

In all probability Tangled has a great story. But unfortunately most audiences don't care about straight fairly tales anymore-If Princess and the Frog is any indication. (I LIKED THE MOVIE) I'm just making a point.

Most people would much rather go see a loud, pop music filled animated film like Megamind.

I WANT Disney Animation to succeed and I'm sure that Tangled is a good movie, and I will see it.
But in all probability, Megamind will crush Tangled.
becuase Megamind is the kind of film that audiences want more.

The competition is fierce.

Here is a thought for all of you naysayers out there. If you want Disney Animation to succeed; give them the benefit of the doubt GO SEE THE DAMN FILM.
(And no Honor, I am NOT calling you a naysayer, so please don't jump down my throat.)


It has already been established that Disney Animation has changed for the better. Ever since Lasseter became chief creative officer they have changed from a executive driven studio, back into a creative driven studio.
In the "Art of Bolt" book, they even mention that.

The dark times are over. Eisner is LONG GONE

The Princess and the Frog was good. Executive produced by John Lasseter.

John Lasseter is the executive producer of every Disney Animation film now.

Unfortunately the films have not be as successful as hoped but they were still good films.

I am sure that Tangled will be a good film as well.

So if you are a fan of Disney Animation and want to see them succeed, go see the film, despite what worries you may have. And if you like it, go see it again.

"Why do that when they can watch pop song laden Tangled?"

For the record guys, "Tangled" is not laden with pop songs. It's classic songs like you would find in "Beauty & the Beast," the only pop song you will find is in the closing credits. And from every indication I've heard it's quite a good film. Very good from what I'm hearing...

I'm sorry. The trailer sucked. This movie is so much like Shrek, which I don't mind if it is a Dreamworks movie. This movie is not the Disney that I knew.

I hope the movie doesn't have pop music, yet if the movie is in the style of pop music, then it would effectively be the same.

For the last damn time - it has been stated many times by the filmmakers and those associated with the film that the trailers do NOT reflect the real nature of this film.

I don't know how many times it has to be said.
Disney is marketing this in a certain way - why...for whatever reason - and those that have seen the film and those who have made it have been saying it is not what the trailer reflects. It is a classic Disney animated musical...like the ones you grew up loving.

With sincerity, if you want Disney Animation to succeed, go out and see the film when it opens. Hollywood only responds to what you open your wallet to...

"But in all probability, Megamind will crush Tangled.
becuase Megamind is the kind of film that audiences want more."

Sorry. Iger lost me when he bought Marvel.

Throughout the whole trailer I was thinking "Hey, this reminds me of Shrek!"

Can't ANYONE come up with something original anymore, I'm tired of all the damn remakes...

I dont want to hate.I'm sure this movie will be...good, but its too much like Shrek. And Rapunzel is one of my favorite princesses...
Also, Megamind was a really great movie.

Monster Vs Aliens? I hated it, the trailer used ALL the jokes. Nothing to laugh about in the theathre.

To the person who said Rapunzel was one of their "Favorite Princesses"...She was never a princess before the Disney Version...

P.S- This movie harks back to the quality of Beauty and the Beast. Dreamworks has nothing on this film. And the reason behind low box office draws is simple, people simply cannot afford to go to the movies anymore.