March Of The Runaways... 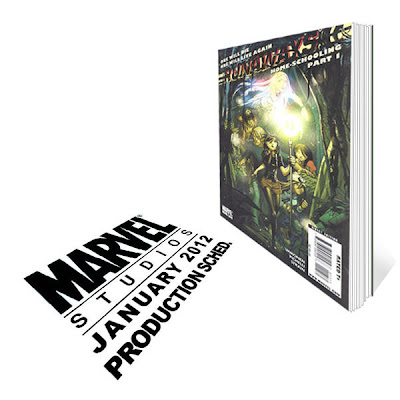 Everyone is wondering what the first film under a Disney/Touchstone banner would be...

With Marvel Studios agreement with Paramount Pictures, the next five films are supposed to be distributed by them. The fourth film in that list will be "Avengers," but it's not yet known what the fifth, and final film in that pact will be. Many thought that it would be "Iron Man 3," but I don't believe that will be the next one after Earth's Mightiest Heroes. With all the films in production, it's looking like the "Runaways" will be that fifth title. Unless there is something in the agreement they made that specified a third Iron Man would be part of the deal, it looks like this title could be the one. Because of all that is in development, this film is the closest to filming. Production Weekly recently tweeted that the film will begin production in March (after originally saying it would start in January).

It's going to be interesting to see what the last Paramount project is and the first Disney project turns out to be. Either way, come 2012/13 we will see the turnover of most of Marvel's production. Anything beyond that will be under the Mouse. Of course, we're not talking about Spider-Man, Ghost Rider (Sony), X-Men/Wolverine and Deadpool spin offs, Fantastic Four (Fox). Everything beyond these will be part of the Mouse's slate. Fox and Sony are scrambling to get films made, even ones that weren't big hits, because they don't want to lose the rights to these potentially lucrative franchises. Disney will hold them to the letter of the contract and the rival studios know that. The second those rights lapse you can expect the Disney/Marvel Suits to be in a planning session on how to integrate these characters into the Marvel Cinematic Universe.

Looking ahead, boldly going forward...
Posted by Honor Hunter at 8:58 AM

You are possibly right. But The Runaways is possibly the one that would fit being the 'first' best, as it will be more self contained than any of the other current Marvel Studios projects.

Can't wait to see what happens with this project.