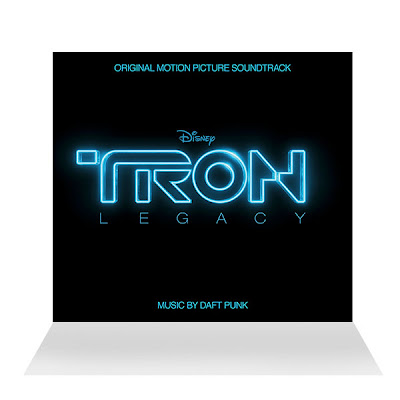 Everything for "Tron Legacy" seems to be building very positively for the Mouse...

It's now been announced that the soundtrack to the sequel to the cult classic will be released almost a month before the film. November 22 will see Tron fans everywhere getting a preview of the film by being able to hear the music from it. Check out the official website for the soundtrack.

Having grown up with admiration of Disney’s groundbreaking original 1982 film “TRON,” Daft Punk took on the scoring of the next chapter of the story with extraordinary thought and precision. The duo assembled a symphony of one hundred world class musicians in London and recorded the orchestra at AIR Lyndhurst Studios, Britain’s premier scoring facility.

From Daft Punk’s first single release in 1993, Guy-Manuel de Homem-Christo and Thomas Bangalter were hailed as a new breed of electronic music innovators. Following their seminal debut in 1997 (Homework), the band went on to release two more studio albums (Discovery-2001, Human After All-2005) and two live albums (Alive 1997, Alive 2007), winning them both critical and popular acclaim throughout the world. Daft Punk are known as much for their music and technical innovation as their groundbreaking and elaborate visual universe, which centers around their irrepressible and mysterious Robot personas. In 2006, their directorial art house film debut, “Daft Punk’s Electroma,” premiered at the Cannes Film Festival and in 2007 they toured internationally with a jaw-dropping live show that was an awe-inspiring combination of their musical and visual prowess. Their collaboration with Kanye West on his #1 hit single “Stronger” was hailed as “The Song of the Year” by SPIN Magazine (January 2008 issue), which also saw Daft sharing the cover with Kanye, having been awarded “Tour of the Year” by the magazine. Daft Punk performed with West on the Grammy Awards in 2008, marking the mercurial duo’s first and only television appearance anywhere in the world. “TRON: Legacy” will mark Daft Punk’s first film score.

Looking forward to everything associated with this film: the movie, the music, the merchandise...

Waw, this is so cool, there will be a physical cd, not just a download, I'm so happy :)

I'm still very apprehensive about the score for this film, although the sound clips on the website do sound better than I had been afraid they might. I still find it at least disappointing that Wendy Carlos is not mentioned anywhere in the press release or on the website, though. I really hope they haven't completely abandoned any use of the original film's fairly iconic musical themes.

Disney's so nervous about this film--and they have right to be.