What Might Have Been, Is Now Just A Dream... 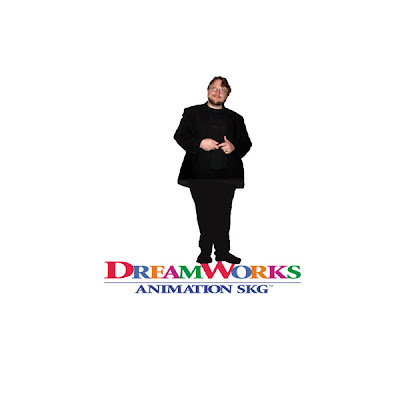 How can that be? Well, what was to be a "Disney Double Dare You!" project will finally get made, but as a DreamWorks Animation film. If you haven't heard, Guillermo del Toro has brought his animated project, "Trollhunters" over to Jeffrey Katzenberg's diggs. And he is directing it as well as writing and producing it. Where does this man find the time? And to add insult to injury, the film will based on a book he wrote that he turned into Hyperion Publishing two weeks ago. That ring a bell to you guys? It's Disney's publishing arm. Sigh. There is an opportunity for a brand franchise that Iger has missed. Sigh again.

While I'm excited about the idea of actually seeing it come to the screen, it's a sad situation when it could have been under the shuttered Disney shingle. I know that Guillermo del Toro's decision to go forward with "The Hobbit" was a major factor in this falling apart, but I can't help but feel that the Mouse Suits couldn't have fostered a better relationship to try and salvage this and other projects. Still, with Sean Bailey, the new President of Production, I feel that the relationship with del Toro could be strengthened. Hopefully the production of "Haunted Mansion" will go smoothly and foster more opportunities with the director.

Still, DreamWorks Animation is moving up in my own opinion. Between hiring world class cinematographers and Oscar winning screenwriters for their future projects, now the involvement of del Toro, the future of Jeffrey's House is now brighter than ever. Not only is del Toro doing "Trollhunters," but he will be listed as an executive producer on "Kung Fu Panda 2," "Puss in Boots" and did fix-up work on the upcoming "Megamind." While I still believe the Lamp is the premiere animation studio to be knocked from the top of the mountain, Katzenberg's company is making a serious play at knocking them from that place. It's going to be interesting to watch over the next few years. Let's hope Bailey can cement a solid working relationship with the director so the Mouse can benefit from him as well.

Hollywood is nothing if not relationships...
Posted by Honor Hunter at 10:58 AM

The only positive thing is maybe there'll be less fart jokes in Katz's films.

For Disney this is a big slip up. But part of me thinks this is a good thing all around.

One thing Disney animation needs to do is concentrate on their own house and producing their own quality films rather than creating more an more production arms and\or saturating the market.

Dreamworks however is working well using talent from Hollywood so this will work out well for them.

So on a selfish note this is perhaps good.

Guillermo's extremely talented, but not everything he touches turns to gold, and it's also very possible this film was NOT appropriate for the Disney name.

There's a different regime in charge now, but there's no reason to assume on first glance that they're also "driving away" Guillermo's project without allowing for the possibility that they might just be right.

I believe that was why it was a separate label: Disney Double Dare You!

It would have been a great new branding chance for characters in the parks, now DreamWorks will just license them to Universal or whoever. Wouldn't it be ironic if the book is a huge bestseller and then the films and merchandising will be shared by Disney's competitors?

I certainly hope the deal for Haunted Mansion leads to more projects. Live-action and animated. And I hope that Guillermo directs it. I know he wants to, he said so, but time is limited.

So is Trollhunters a good story???? Or are suppositions being made because of del Toro's rep?

For every Shyamalan, there is a Chris Sanders (Lilo & Stitch - now How to Train Your Dragon). Personally, I'd compare losing Del Toro to losing Sanders before I think of comparing it to losing Shyamalan.

It's a big blow to Disney for sure.

"While I still believe the Lamp is the premiere animation studio to be knocked from the top of the mountain, Katzenberg's company is making a serious play at knocking them from that place."


Disagree. "Dragon" aside, I can't think of one Dreamworks animated movie that can even dream about being in the same ballpark as a Pixar film. And based on what's ahead for Dreamworks, I don't expect that to change: KF2...a sequel to a just so-so movie, Puss in Boots...a character from a long-stale franchise, and Megamind....another slap-sticky movie that seems to rip off Incredibles. Until Dreamworks puts out its own classic like Toy Story, Finding Nemo, Incredibles, Ratatouille, Wall-E, Up....etc., I think Pixar is standing very sturdy atop the mountain.

I have to agree with anonymous above. Although I haven't seen Dragon, the ONLY Dreamworks movie worth a darn is Kung Fu Panda.
MOST of them are a series of potty jokes that I won't let ANY of my kids see.
I also have to disagree with the anonymous poster that cried about Chris Sanders leaving. I don't get everyones obsession with this guy. Lilo and Stitch was OK, but it wasn't THAT good. Compared to the garbage coming out of Disney animation at the time, it was better, but it's no Beauty and the Beast. And American Dog looked HORRIBLE and the movie that resulted from American Dog was lame too.

In other words... Disney doesn't know what it wants and is making kneejerk decisions because of it.

What the heck were you thinking, Mouse?