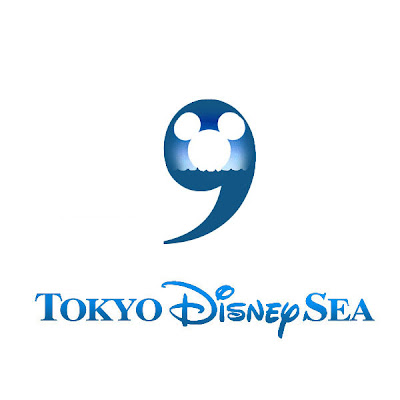 Well, it's more like the seven ports of DisneySEA, that is...

But on this day, nine years ago, Walt Disney Imagineering let everyone see the worlds they could create if given the opportunity. The Oriental Land Company expanded the Tokyo Disneyland park into a resort ten years ago, turning the park into the Tokyo Disney Resort. At the end of it all, they opened the Second Gate in the Resort.

Tokyo DisneySEA was simply a stunner. Nothing like this had ever been done, save for EPCOT possibly. It was not only the most beautiful theme park in the entire world, it was the most expensive. Costing almost five times what it's Ugly Sister in California took to build. A place which truly shows the magic that Disney can bring to a world. A balanced opposite to Tokyo Disneyland, which focuses on "Lands" and has seven lands to express the magic of our world. Tokyo DisneySEA focus on the "Sea" and has seven ports to showcase aquatic exploration and adventure.

The only thing lacking in the park is the number of rides it has, and that is something that is slowly being taken care of. With each year the OLC announces a new attraction to add to an already impressive slate of rides and shows found nowhere else in the world. Even the clones it has are impressive. If you have to have a clone, the Indiana Jones attraction is one to have! And their Jumping Jellyfish is miles better than the bare bones version that DCA debuted months before.

If you ever get the opportunity to go and see this park, I can't recommend it high enough! Seeing and experiencing the wonders of what Imagineering are capable of is just an amazing experience.

Why is Jumpin' Jellyfish better in Tokyo.

Come on, get over it!

You must be crazy. I've riden both and there is no comparison. Have you even scene Tokyo's version? It has details and theming. DCA's is just metal rods and a cheap canopy. The one in Mermaid Lagoon has a detailed top that actually looks like a jelly fish with tentacles and all. It doesn't just have a seat, they use clamshells. The lighting is more spectacular because they set it indoor.

As for always comparing the two parks? So that the management always remembers that we're watching and will never accept another mediocre park again. DCA has been a PR nightmare that could have been avoided. DisneySEA is going to be the park that Disney will have to measure everything it builds and I hope fans continually put the pressure on them. Like Honor said, with the internet now, there is no way they can tell us they gave someone a great park and we wouldn't be able to click over and say, oh, yeah? Is it as good as this?

Until they build something of equal value, Tokyo will always be a thorn in the company's side. We simply expect more. If you don't, fine. Go to Knotts, go to Six Flaggs. You'll be happy with the inferior product you get there.

Disneysea is a stunning park. It already had massive points with me for having a whole port themed on Jules Verne and 20,000 Leagues Under the Sea... Given my own blog, it should be no surprise to anyone that 20,000 Leagues and Journey to the Center of the Earth are tied for my favorite Disney attractions anywhere, even toppling the Haunted Mansion.

What I appreciated most of all... beyond the Jules Verney thing and the overall best quality that money can buy... is how the park is united by a narrative of exploration and discovery. While the rides each have conflict in them to provide some spice, the narratives aren't driven by conflict. They're about the journey, from Sinbad's Storybook Adventure (which should be made into an animated film) to Indiana Jones and the Temple of the Crystal Skull to Fortress Explorations to 20K to even the Tower of Terror. It's fantastic to have seen them put the kind of thought they did into a subtle but uplifting theme.

Disneysea really was one of the highlights of my trip to Japan and I wish, I really do, that we had something like that a little closer. I would die to see 20K and Journey imported to the Disneyland Resort.

I agree with you on the Jules Verne thing, being as I'm a huge Steampunk kind of person, but 20k is a good ride, well themed, but not the best there for sure. It has its flaws. The Journey to the Center of the Earth ride on the other hand is amazing. And while I understand you wishing them cloned here, I don't. I wish that they had originally built the park here, but since they didn't, I'd like it to remain unique and be only in Japan. The same goes for many of its attractions. While I don't want to have them cloned, I would love to see the level of detail, theming and story around them put to good use on creating more original attractions here for the Disneyland Resort.

The only justification for any type of clone would be the addition of a "Discovery Cove" area, which sadly, there isn't enough room for anymore. Perhaps someday another resort will get that as a possible Second/Third Gate? HKDL, perhaps?

As for Sinbad, I'm not a fan of the attraction, the kiddie design isn't appealing to me. I still long for the original pitch which was to make it like Pirate of the Caribbean, only set in an Arabian World. This far more detailed and realistic representation is what I would have hoped for. Being as the park didn't have enough attractions for young kids, this doomed that project unfortunately.

The way I see the comparison... is look at Turtle Talk in both parks-

DCA- A bare bones theatre with no theming at all (set in a Hollywood building) where a turtle talks to us.

TDS- A lavishly themed queue and underwater room with actual THOUGHT put into it turning the experience into an explorative encounter using a new technology.

The whole thing has an awesome amount of thought put into how to make it thematically work in TDS, where in DCA they just stuck it anywhere it could go.

Again, DCA, you walk into a theatre inside a building themed to animation, TDS, you walk into the belly of a boat where a below water room has been converted into a research station.

The cheapest airfare to Japan from Los Angeles is $900 at the moment, so I try not to think about this park too much.

I hope this bloody master's degree pays off. I would be shuttling my butt back and forth between here and Maihama every other month.

Turtle Talk is a fun and yes, detailed attraction, but WDI had to fudge a bit to explain how a Pacific Ocean creature wound up in the Atlantic, much less New York Harbor. The attractions they're adding now are increasing the things to do in the ports, particularly the American Waterfront. But I hope they create some more original attractions like the ones they opened up with. And have them themed to the ocean so they match the original design of the park.

I'm all for cloning attractions and bringing them stateside. The round-trip airfare for me to Tokyo was over $1300CAN, so I have a vested interest ^_^

If I were in charge of anything, I would want to set up Discovery Bay in DCA, overwriting the Pacific Wharf. Bring in Mysteries of the Nautilus, 20,000 Leagues, Journey and Cafe Hyperion. I would change 20K and Journey to use ride vehicles looking like the sub-pods and drill machines from Atlantis, and Journey would have to change its story slightly to being an excavation into Grizzly Peak. Otherwise, it's perfect.

20,000 Leagues certainly isn't the most technically deft ride... It's basically a Fantasyland darkride... but I love the theme, its sudden turn into utter weirdness, and the combination of Harper Goff-style design (I wouldn't denigrate it by calling it "Steampunk") with cartoony characters. It has charm.

Likewise with Sinbad. I don't dwell to much on what could have been (well, I do with the Pooh ride at Disneyland... TDL's version is unreal!). For what it is, I enjoy the cartoony characters and the catchy song. It's closer to It's a Small World than Pirates, and that's okay. And it's a perfect template for an animated film... Gee Disney, enough handwringing over boys' movies already. Here's one already in your lap.

Me calling it Steampunk in no way denigrates it. I happen to love the genre.

Sorry, Turtle Talk at TDS is just way too forced and convoluted. That is not a good example. Talk about shoehorn.

But the rest of TDS is something to behold, even though more rides are needed.

I'm the one who considers it a denigration!

It'll never pay off spokker, no one would ever hire you. At least they'd fire you a month or two after realizing their mistake of hiring a person like you.

Amazing you still read and lurk this spokker, give it up. Remember, every single Disney forum has banned you.

"Sorry, Turtle Talk at TDS is just way too forced and convoluted. That is not a good example. Talk about shoehorn."

Are you kidding me? Compared to the tripe DCA got??? At least THOUGHT went into it at TDS!

That anybody asked the question, "How do we make this attraction make sense?" is a testament to how much more thought went into TDS than DCA.

As expensive as DCA's makeover is, it will still lack a cohesive and coherent theme and function more like a patchwork of working parts of varying quality.