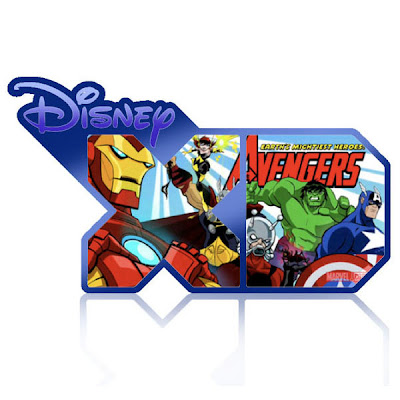 The beginning of the transformation of Disney XD into the Marvel Channel is almost upon us...

New animated series "The Avengers: Earth's Mightiest Heroes!" will premiere Wednesday, October 20 at 8:30 p.m., ET/PT on Disney XD. Produced by Marvel Animation, the series features Iron Man, Thor, Captain America, The Hulk, Ant-Man/Giant Man and Wasp. They form the Avengers, a team assembled when the powers of a single hero are not enough to save the world.

Beginning Wednesday, September 22, Disney XD, DisneyXD.com/Avengers, Marvel.com, MarvelKids.com and Disney XD Mobile will roll out 20 micro-episodes introducing the team's core members. Each five-and-half-minute episode focuses on the back story, allies and nemeses of the heroes before the Avengers were formed.

In the two-part series premiere, "The Breakout," Iron Man, Hulk, Thor, Ant-Man and Wasp have defeated some of the most dangerous Super Villains on the planet. But when the Super Villain prison system mysteriously shuts down, chaos is unleashed on the world. Earth's Mightiest Heroes must now band together as the Avengers to protect the planet from the threats that no single Super Hero could face alone. Their first task is to try and stop Graviton, a being whose power dwarfs anything ever seen. He's after Nick Fury, but will destroy the world to get to him. Individually the heroes have no chance, but together they can make a difference.

The complete multiplatform rollout is:

Select micro-episodes will be made available as a free preview on iTunes.

The complete micro-series becomes available on Disney XD on Demand on AT&T, Verizon, Charter and Cox.

The series becomes available on Disney XD on Demand on AT&T, Verizon, Charter and Cox.

And there are still two more Marvel series that will premiere next year. Not to mention several other projects in the work for XD.

Maybe they could call it the Men-In-Tights Network...
Posted by Honor Hunter at 8:20 PM

This all sounds like a lot of fun. Way to go!

Any comment on the Gnomeo & Juliet trailer just released? I thought this project was canned? Wasn't Elton writing new music for this, it's all back catalogue?
From the makers of Space Chimps.
Geez.