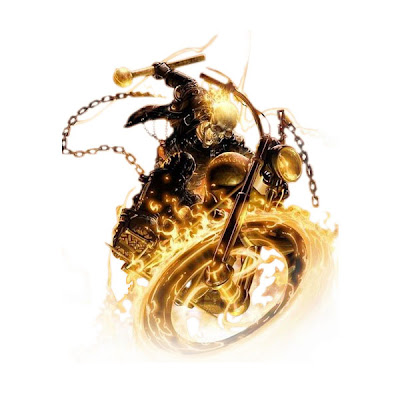 Things appear to be moving forward with the sequel another Marvel property...

David Goyer has been pretty loose with his lips lately about "Ghost Rider 2" and what the script will look like. Apparently it'll look a lot like his original script for the Hellrider. Which is a good thing. Goyer says the sequel will essentially be the original script he wrote with minor changes. One of the main ones is that there would be no need for an origin story. It's a really good script that I remember reading almost a decade ago. It's far better than the cheesy script that they wound up turning into the first film. Nicolas Cage's hammy role is quite different than Goyer's original take on the character.

Johnny Depp was rumored to be up for Johnny Blaze back then. This was years before he shot to stratospheric levels of fame playing Jack Sparrow. The tone of the script was a straight "R" and it'll probably be toned down a bit, but I wouldn't think much as most "PG-13" films would qualify with an "R" rating a decade or so ago. I think Sony has made a good move going this direction. Hopefully, this turns into the Ghost Rider film I wanted to see when I heard they were making one.

Johnny Depp would have been sooo much better than Cage! :(

I too read Goyer's original script and agree it was kickass. Unfortunately they're sticking with Cage. He's become a parody of himself with all these roles. I wish they'd look for someone else.

Do you like the Rush song, "Ghost of a Chance?"