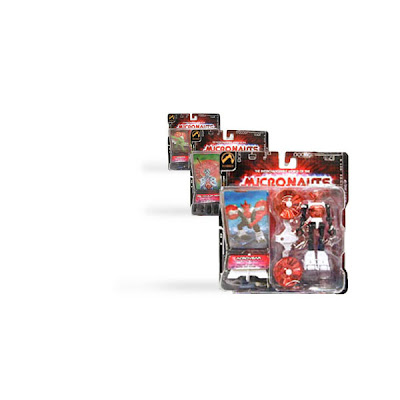 Another piece from my childhood gets made into a film, and this one I'm happy about...

According to an article in the Wall Street Journal, J.J. Abrams, the mini-Spielberg-like producer, is in talks to bring the toy franchise "The Micronauts" to the big screen. I could actually see this as something good. Abrams has a way of taking something that could turn out to be really bad and giving it an intelligent spin. He's made the only one of the three "Mission Impossible" films that I actually enjoyed, his "Cloverfied" was a mini-event film and he's created or co-created some of the best television of the last decade.

I remember as a young boy seeing all those Micronauts toy figures lined up on a shelf at a local store. I was one of those kids that played in the backyard with Baron Karza and Acroyear. The comic that Marvel produced to go along with the toys was also in my collection as well. Of the two, the comic was definitely the better enterprise. The stories got pretty dark, especially for a comic book back then.

This could be a great adaptation if done correctly, I know that Hasbo and everyone is thinking that this will be a "Transformers" type franchise; only in reverse since the characters are very tiny, not tall. I could see this playing rather well and if J.J. gets some of the talent that surrounds him to work on it, this could be a really interesting project.