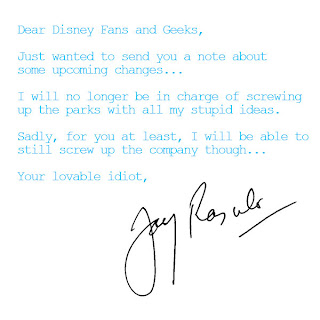 A blessing, but a mixed blessing. If you haven't heard the news reported in the article at the New York Times, Jay Rasulo and Tom Staggs have switched rolls kind of like Lindsey Lohan did in that movie a few years back. Well, not exactly, but Staggs will take over Rasulo's job and Rasulo will take over Staggs.

While I'm immensely happy that Jay will no longer be screwing up the parks, it doesn't give me any comfort that he'll now be in charge of financial aspects of the Mouse. But then, maybe a bean counter like himself will fit far more in that role than as the head of a very creative part of the parks.

As for Staggs, I don't know him extremely well, but he has handled the Walt Disney Company quite well over the last few years. Having met him, he comes off as a far more likable guy than Jay, but that doesn't say much about him. His biggest problem for me was his use of a Blackberry instead of an iPhone. Found out some interesting opinions on Steve Jobs that day... but I digress.

I'll try and have more commentary to follow, but until then, here's the press release:


BURBANK , Calif., November 12—In line with The Walt Disney Company’s goals of advancing its global businesses and brands while providing new opportunities and challenges to executives, Disney President and Chief Executive Officer Robert A. Iger announced today that two of the company’s most senior leaders would assume new roles at the end of the year.

Both will remain members of the senior management group reporting to Iger.

“Jay and Tom are both dynamic and versatile executives, who have done a great job over the last several years and have helped me to shape Disney’s strategic direction,” Iger said. “By giving them exciting new challenges that build on both their strengths at a time when each of their respective areas are on the right strategic track, the change is good for them and good for the company.”

As CFO, Staggs has helped guide Disney through one of its most important periods of expansion and financial success while steering it effectively through two sudden global economic downturns in 2001 and 2008. Throughout, he’s been praised by Wall Street for his financial and communication skills and has consistently been voted the country’s top entertainment industry CFO by analysts polled by Institutional Investor magazine.

Working closely with Iger, Staggs has played a critical role in a wide variety of Disney’s strategic and operating initiatives, including the acquisitions of Capital Cities/ABC, Pixar and the pending acquisition of Marvel Entertainment. As CFO, he spearheaded Disney’s realignment of its performance goals toward a combination of profit growth and strong long term capital returns and free cash flow. He has also led company efforts to drive greater cost and capital efficiency throughout the organization and to put in place well-received company-wide environmental and healthy food policies.

“For over a decade, I’ve had a unique opportunity to build our business by collaborating with a group of great executives running a wide range of media and travel businesses,” said Staggs. “Taking the operational reins of one of our biggest and most complex businesses during the period of rapid global expansion launched by Jay is tremendously exciting and a challenge I’m really looking forward to.”

Under Rasulo’s leadership, Parks and Resorts has built on its traditional strengths as the world’s preeminent theme park operator to create a range of businesses that have made Disney a global leader in the family vacation industry.

As part of this growth strategy, Rasulo has overseen a major expansion of Disney’s California Adventure at Disneyland Resort, which culminates with the opening of Cars Land in 2012, and of Hong Kong Disneyland, where work is underway on the creation of three original new lands. He has also led negotiations with the Chinese government to begin development of a new theme park in Shanghai.

In addition to park expansion, Rasulo has been the principal architect of the growth of the award-winning Disney Cruise Line, which is currently adding two new ships, Disney Vacation Club and Adventures by Disney. Prior to becoming head of Disney Parks and Resorts in 2002, Rasulo greatly improved the operating performance of Disneyland Paris, now the number one tourist destination in Europe.

By emphasizing innovative marketing, strategic investment and financial discipline, Rasulo has also deftly managed the Parks and Resorts businesses through difficult periods, first as the unit’s President after tourism plummeted globally in the wake of 9/11 and later as Chairman during the 2008-09 economic downturn. Throughout, he’s been an important advocate for the tourism industry, serving as Chairman of the Travel Industry Association of America in 2006 and 2007. Rasulo was inducted into the Travel Industry Hall of Leaders in 2008.

“It’s been a tremendous honor to lead the almost 100,000 Cast Members, Crew Members and Imagineers during a period of unprecedented investment at Disney Parks and Resorts ,” said Rasulo. “I look forward to building on Tom’s success as CFO by working with Bob to advance Disney’s growth strategy, while continuing to strengthen our balance sheet and create shareholder value.”

Both Rasulo and Staggs are longtime Disney executives and both serve on the board of Euro Disney S.C.A., the French parent company of Disneyland Paris.

Rasulo joined Disney in 1986 as Director, Strategic Planning and Development, advancing to more senior positions there, and later became Senior Vice President, Corporate Alliances. He then led Disney Regional Entertainment before moving to Paris as President, Euro Disney before eventually becoming its Chairman and CEO in 2000. A native New Yorker, Rasulo has a degree in economics from Columbia University and both an MA in economics and an MBA from the University of Chicago. Before joining Disney, he held positions with Chase Manhattan Bank and the Marriott Corp.

Staggs joined Disney in 1990 as Manager of Strategic Planning and soon advanced through a series of positions of increased responsibility, becoming Senior Vice President of Strategic Planning and Development in 1995 before becoming CFO and Executive Vice President in 1998. Born in Illinois, Staggs received a BS in business from University of Minnesota and an MBA from Stanford University. He worked in investment banking at Morgan Stanley & Co. before joining Disney.

About The Walt Disney Company
The Walt Disney Company, together with its subsidiaries and affiliates, is a leading diversified family entertainment and media enterprise with five business segments: media networks, parks and resorts, studio entertainment, consumer products and interactive media. Disney is a Dow 30 company with annual revenues of approximately $36 billion in its most recent fiscal year.

"His biggest problem for me was his use of a Blackberry instead of an iPhone."

Anyone not drinking the Apple Kool-Aid is clearly a threat to the Disney company. Sure you can't share his opinions of Steve Jobs?

Anyways, enjoy your blogging even though you are an Apple fanboy. ;)

Sorry, but those opinions would be dangerous to reveal...

For me more than Mr. Staggs. Hehe.

And don't worry, not everyone drinks the Kool-Aid. But you really shouldn't knock it until you've tasted all the flavors!

I'm partial to the new Raspberry Chipotle flavored, myself...

Disney issues out company blackberries... most people who work there are addicted to them.

^ I'm surprised they don't issue out company out company iPhones, given the company's connection with Apple, and Iger's preference for them.

Anyway, I'm THRILLED Jay Rasulo is finally gone. I know a lot of fans (and this blog for sure) have been waiting for this day for a loooooong time.

That said, I'm not sure about Staggs - his background sounds heavily financial, not the creative type the division is needing right now.... and I'm skeptical of ANYONE from Strategic Planning. Wasn't that the division Iger shut down for its sucking the soul out of the Disney company?

Celebrate!
Give a Jay get a Staggs.

Well, we wanted to see him go, just hoping he would have gone further than just across the hall. New guy can't be any worse, let's hope for the best.

Some divisions have the option of iPhones.

Friday in the LA Times it was mentioned that this move is part of a cross training effort for Iger to find a successor. I shudder to think of Jay running the whole company.

Oh yes, there is a God and he has a cruel sardonic sense of humor. I don't think this "Freaky Friday" swap is going to change anything. Both men are bean counters and Iger is just mixing things up to see who will sink or swim and move on to the bonus round.

Guys, as the CFO for the company, Staggs would have to signed off for the investment in DCA. It will be fine.

Ever stop and think the Times blog bit about Staggs being groomed for Prez was put out by him to distract us from the truth?

This move DOWN to Rasulo's old job is not a "reward" for doing good, no matter what Staggs' PR guys might suggest to the press.

There's no god, but this is great news nonetheless.

well his demands for higher profits at whatever cost got Lights of Winter shutdown at EPCOT -- was that his final blow at the parks? can you get any real info behind their demise??