A Vacation From Reality, A Haven From Chaos... 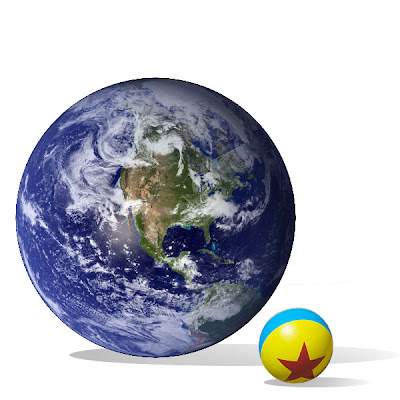 In these troubled economic times there are small pockets of calm that the reality of the outside world seems to not have any affect on...

I've mentioned how Apple, Inc. is one of these companies/businesses/lifestyles that is an example of this. Google is another. The Walt Disney Company, while not recession proof, happens to be weathering this storm remarkably good. The one area of the company that is a total part of this anomaly lies in Emeryville. In fact, every one of these companies are in northern California or the northwest. Maybe it's just the general area or the state of mind, or maybe it's just Steve Jobs and those that work for him or compete against him? But the Lamp is what I'm talking about.

That little company that seems to be showing everyone else how to run a successful business and to prosper. The economic swine flu that everyone else is suffering under happens to not infect that little plot of land in the bay area. Pixar is immune. While other companies seem to be cutting back, laying off or slowing expansion, John Lasseter and his crew are plowing forward. Success is a wonderful cure for a business.

Steve Jobs has been part of two business stories about that with the Fruit Company and the Lamp. I'm crossing my fingers that his magic touch goes on for a third time with Disney and this company will be able to ride the current and future crisis's as well. Hopefully Iger has his ear very close. We already know he's helped out on the redesigned Disney Stores/Imagination Parks idea. His former employee, John Lasseter is in charge of animation has been working to prop up the animation side of the company. Maybe a few more suggestions inside those Board meetings will be implemented and spread throughout the entire company? Who knows, maybe he'll convince Iger to let Lasseter build that swanky new pad for WDAS on the Lot? Or better yet, in JC's Glendale Kingdom?

But back up north... you wonder what it's like to work in a place of relative calm while the world around you falls apart. And right now, they're not only surviving, they're thriving. In fact, the company is bursting at the seams. At a time when most companies are looking at how to cut cost, Pixar is looking at how to grow. They simply have too many people that don't fit in the existing building. And many more are needed. That's why over the next decade they're going to be adding two new buildings that will expand and house their current and future workers. Unlike many other animation studios, the artist working on productions at Pixar know they've got a little job security for the next four or five years. There is that much work to do. The planning of projects is that far in advance.

Now, not everything is perfect in Emeryville. One thing that some people will complain about is the fact that Pixar pays its employees less than other companies (about 20-25% less). But many, not all, of the people that work there view this as a trade off for job security and an environment that is far more inclusive than most of the animated studios in the Los Angeles area. And they have lost several talented artist over the last couple of years (Lou Romano, we miss you!). But for every artist that leaves the place there are many more lined up to get a shot at working for the cream of the crop.

Sadly or sourly, depending on how you look at it, Pixar is now the pinnacle for everyone to work for. They are the man on the mountain that everyone wants to toss down. This used to be the spot that Walt Disney Animated Studios throughout the late 80's to the later 90's. This was a spot they held from the 30's all through the 60's alone. There really wasn't any credible competition then. It wasn't until the eighties that there was finally some form of a challenge to their near monopoly on animated features.

During the mid-nineties the Mouse made overtures to Pixar about creating a computer generated film and with it helped spawn a half dozen other studios that cropped up over the next three or four years. It's really hard to believe that before the Lamp, all these other studios didn't exist. And as they ascended, WDAS (Walt Disney Feature Animation) withered and slowly started to fade away. It took bringing in Pixar to revive the division. Kind of like Apple buying NeXT to save itself in a sense. And now we wait and see with the release of "The Princess and the Frog" if the Southern California branch of Pixar becomes part of this refuge.

Now, if only the rest of the economy would as well...
Posted by Honor Hunter at 11:25 PM

Pixar is NOT "immune." Apparently Lassiter is spread too thin, and Ed Catmull will be retiring soon. This has gotta affect the company adversely.