Money makes the Mouse go around... 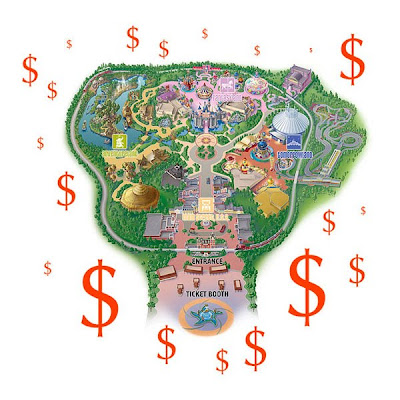 A lot has went under the radar lately with the Mouse's Asian exploits...

Tokyo. Hong Kong. Shanghai. Tokyo is mentioned quite often on this site, as most of you know my love of Tokyo DisneySEA. I'll talk about Shanghai Disneyland in a future post, but not much has been mentioned of the fifth anniversary of Disney's first Chinese Gate.

Hong Kong Disneyland, the fifth Magic Kingdom style park celebrated half a decade earlier in the month and although the park/resort has had financial troubles from the get go, things are starting to look up. Having missed its first year target by about a quarter of a million visitors, the next year dropped off quite a bit as the novelty of the opening wore off. Now, even though it missed the original mark, it wasn't by much, there were over five million guests that went through those turnstiles. The parks' third year saw a bump from the second year, and last year was a modest bump up from that. This year the park seems to be improving on that and if the current trend continues then the attendance will get close to the first years mark. See that trend? If the current projections continue and the park keeps attracting a loyal, and growing following, then next year will see them break through the opening year numbers. The Chinese are slowly growing to like and appreciate what the Disney experience has to offer. With all the seasonal theming and holiday layovers that the entertainment division has come up with, the public is accepting the park as a permanent part of the Hong Kong setting.

There are cultural differences and obstacles that the Mouse has had to overcome, but they're slowly making progress. Much of this progress/learning will/has been applied to Shanghai. But the future is finally looking up with more guests entering the park, and just as important: spending money on food and merchandising. The financial troubles have led the company to not take any royalties it was contractually guaranteed during the last two years. That agreement has been reworked and is now tied to park performance. And with the uptake in the crowds on Lantau Island, that means that starting next year Disney will start taking in those profits again. And as more positive news happens, more optimism grows within WDI that other projects will be approved more quickly. After all, there's a lot of expansion room still left for the first park in Hong Kong even after the Extreme Expansion of 2011-14. The area to the south of the current expansion has many possibilities as well as several areas behind and beyond Fantasyland. There are many classic Disney attractions that Imagineers would love to add and plus in that section by or around the middle of this decade. As always, time will tell. And money will be the storyteller.

Notice I said "first" park? That's because the Mouse has a couple years on its deal before construction has to begin on a Second Gate or the land across the Esplanade is free for the government of Hong Kong to use or sell to another buyer. Will they do that? Not likely. Will Disney start work/break ground on a second gate by 2013? Again, not likely. What will likely happen is a renegotiation of the terms of the deal. An extension so to speak. An announcement of a second park will be an important and integral part of the resort's future, but not until the latter part of this decade. But with the attendance going up and construction of the new lands, the news coming out of Penny Bay is finally good news for Burbank.

And that's good news for you and I as well...

no offence.. but i'm really losing interest in your blog.

I write for me, not you. Always have and always will.

I'm just glad there are people interested in my musings..

No offence, but I've lost interest in some of the comments.

The articles are usually interesting though, I like the insider stuff best, but I can understand how that information would be rarer.

Disney's financial year goes from October to September, so what Honor is reporting on is very much related to what is happening in Hong Kong. The results that just ended are a great example that the park is finally starting to pull it's own weight. The news that they may actually break the first years' attendance this year means a lot. Thanks for the post, HH!

Hong Kong is THE place to build DCA! You could even make it Disney's American Adventure!

Thanks for the posts!

Hey, thanks for the post. I personally don't have time to research and read about ALL of the Disney Parks but they do interest me so making a quick stop on your blog give me the quick info I am looking for. Keep up the great work!

I would LOVE to see them resurrect Disney's America, but I suspect that they will go with a Marvel park. A Marvel park makes the most sense.

A MARVEL park??? Sheer idiocy. Talk about focusing too much on one demographic - such a park would appeal only to boys - that's even worse than the lame princess meet-and-greets (at least those focused on DISNEY characters). The day Disney builds such an abomination as a Marvel park is the last day I spend a dollar at any of its parks.

are there any ideas floating around for what a 2nd park in hong kong could be? anything borrowed from the states or previous concepts we all know about?

"The day Disney builds such an abomination as a Marvel park is the last day I spend a dollar at any of its parks."

You might want to start saving some of your money now, or maybe spend as much as you can afford on the Disney elements you still enjoy. From the looks of it, there may well be a Marvel park in the works. The DL Paris president indicated that the would be interested in one.