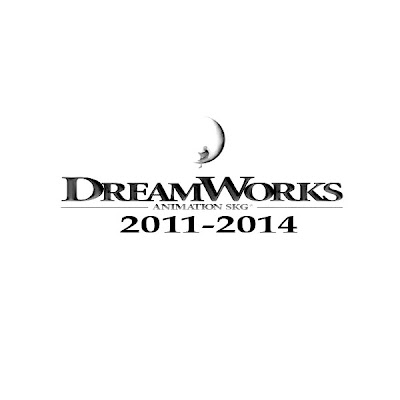 Jeffrey Katzenberg, who happened to have ran WDAS during the Second Golden Age has created a very formidable rival in DreamWorks Animation; something that many thought was impossible. Year after year, he's been able to create another hit. While the story and tone of DWA films sometimes draws snarks and name calling, the thing that stands out is how much Katz is a survivor, and a successful one at that. It's not easy to make it in Hollywood, it's not something that everyone can do, even though many try; most fail. I have to commend Jeffrey and his Suits for putting together a large collection of very talented animators (that may or may not include Keane, whenever he decides on that offer) and the collection of hits they've had in a very competitive industry.

So as I mentioned, today the Moon gave everyone a peek at what to expect between now and the next three years. It's a very crowded schedule.

The Company's current plan features six original films and is anchored by three sequels based on its hit Kung Fu Panda, Madagascar and How to Train Your Dragon franchises.

"At DreamWorks Animation, our creative ambition has never been greater and the release schedule we're unveiling today is designed to give our movies the time and resources they need to realize their full potential so each one can become a true event for our audiences," said Jeffrey Katzenberg, Chief Executive Officer of DreamWorks Animation. "Thanks to the extraordinary talent base at DreamWorks Animation today, our feature film slate is full of both original story ideas and exciting new franchise chapters that will form a solid foundation for the studio's creative output through 2014," added Bill Damaschke, the Company's Chief Creative Officer.

Below is additional detail on the feature films that comprise DreamWorks Animation's theatrical release schedule:

Kung Fu Panda 2 will be released on May 26, 2011. It is being directed by Jennifer Yuh Nelson (Kung Fu Panda), produced by Melissa Cobb (Kung Fu Panda) and written by Jonathan Aibel & Glenn Berger (Kung Fu Panda). It stars Jack Black, Angelina Jolie, Dustin Hoffman, Gary Oldman, Jackie Chan, Seth Rogen, Lucy Liu, David Cross, James Hong and Michelle Yeoh. In the sequel, Po is living his dream as The Dragon Warrior, protecting the Valley of Peace alongside his friends and fellow kung fu masters, The Furious Five. But Po's life of awesomeness is threatened by the emergence of a formidable villain, who plans to use a secret, unstoppable weapon to conquer China and destroy kung fu. Po must look to his past and uncover the secrets of his mysterious origins... only then will he be able to unlock the strength he needs to succeed.

Puss In Boots will be released on November 4, 2011. It is directed by Chris Miller (Shrek the Third) and produced by Joe Aguilar (Merry Madagascar) and Latifa Ouaou (Monsters vs. Aliens). It is being written by Tom Wheeler (The Cape). Andrew Adamson (Shrek, The Chronicles of Narnia) and Guillermo del Toro (Pan's Labyrinth) are serving as executive producers on the film, which stars Antonio Banderas, Salma Hayek, Zach Galifianakis, Billy Bob Thornton and Amy Sedaris. Way before he ever met Shrek, the legendary Puss In Boots goes on a heroic journey, teaming up with mastermind Humpty Dumpty and the street-savvy Kitty Softpaws to steal the famed Goose that lays the Golden Eggs. It's the adventure of nine lifetimes!

Madagascar 3 will be released on June 8, 2012. It is directed by Eric Darnell (Madagascar, Madagascar: Escape 2 Africa) and produced by Mireille Soria (Madagascar, Madagascar: Escape 2 Africa) and Mark Swift (Madagascar: Escape 2 Africa). It is being written by Noah Baumbach (Fantastic Mr. Fox) and once again stars Ben Stiller, Chris Rock, David Schwimmer, Jada Pinkett Smith, Sacha Baron Cohen, Cedric The Entertainer and Andy Richter. Alex the Lion, Marty the Zebra, Gloria the Hippo, and Melman the Giraffe are still fighting to get home to their beloved Big Apple and of course, King Julien, Maurice and the Penguins are all along for the comedic adventure. Their journey takes them through Europe where they find the perfect cover: a traveling circus, which they reinvent – Madagascar style.

Rise of the Guardians, based on the forthcoming books by William Joyce, will be released on November 21, 2012. It is directed by Peter Ramsey (Monsters vs. Aliens: Mutant Pumpkins from Outer Space) and co-directed by Joyce. The film is being produced by Christina Steinberg (Bee Movie, National Treasure) and Nancy Bernstein, long-time head of Production at DreamWorks Animation. Rise of the Guardians is being written by Pulitzer Prize winner David Lindsay-Abaire (Rabbit Hole) and executive produced by Guillermo del Toro and Michael Siegel. It stars Chris Pine, Alec Baldwin, Hugh Jackman, Isla Fisher and Jude Law. More than a collection of the well-known childhood legends, Rise of the Guardians is an epic adventure that tells the story of a group of heroes – each with extraordinary abilities. When an evil spirit known as Pitch lays down the gauntlet to take over the world, the immortal Guardians must join forces for the first time to protect the hopes, beliefs and imagination of children all over the world.

The Croods will be released on March 1, 2013. It is being written and directed by two-time Academy Award® nominee Chris Sanders (How to Train Your Dragon, Lilo & Stitch) and Kirk DeMicco (Space Chimps) and produced by Kristine Belson (How to Train Your Dragon) and Jane Hartwell (Shrek). It stars Nicolas Cage, Ryan Reynolds, Emma Stone, Catherine Keener, Clark Duke and Cloris Leachman. The Croods is a comedy adventure that takes us back to a previously undiscovered era in the history of our planet known as the Croodaceous, when nature was still a work-in-progress... full of never-before- seen creatures and landscapes. Audiences will relate to the hilarious family antics as an imaginative and resourceful newcomer helps the Croods navigate their way through the fantastic world beyond their cave.

Turbo will be released on June 7, 2013. It is being directed by David Soren (Merry Madagascar), who first brought the project to the studio, and produced by Lisa Stewart (Monsters vs. Aliens). It is being written by Darren Lemke (Shrek Forever After) together with Soren. Turbo tells the story of an ordinary garden snail with an impossible dream: to become the fastest snail in the world. When a freak accident gives him extraordinary speed, Turbo sets out to try to make this dream come true.

In Me and My Shadow, which will be released on November 8, 2013, the studio will pioneer a groundbreaking combination of both CG and traditional animation techniques seamlessly together throughout the film. The film is directed by Mark Dindal (Chicken Little, The Emperor's New Groove) and produced by Melissa Cobb (Kung Fu Panda, Kung Fu Panda 2) and Teresa Cheng (Shrek Forever After, Spirit: Stallion of the Cimarron). It is being written by Tom Astle and Matt Ember (Get Smart). Me and My Shadow tells the story of Shadow Stan, an extremely frustrated shadow who yearns for a dynamic life but happens to be stuck with Stanley Grubb, the world's most boring human. Finally pushed to the brink, Shadow Stan breaks the singular rule of the Shadow World – "They lead, we follow" – and takes control of Stanley!

Mr. Peabody & Sherman will be released on March 21, 2014. It is directed by Rob Minkoff (Stuart Little, The Lion King) and produced by Jason Clark (Monster House, Stuart Little) and Denise Nolan Cascino (Megamind). It is being written by Craig Wright (United States of Tara, Six Feet Under). Robert Downey Jr., Susan Downey, Bullwinkle Studio's Tiffany Ward and Classic Media's Eric Ellenbogen are serving as executive producers on the film, which stars two-time Academy Award® nominee Robert Downey Jr. Based on Jay Ward's classic cartoon, Mr. Peabody is the world's smartest person who happens to be a dog. He and his "pet" boy Sherman discover that someone has stolen their time traveling WABAC machine and is changing moments in history to disastrous and comical results. It's up to this most unexpected of father-son teams to somehow put a stop to this villain before his actions destroy the space-time continuum in Mr. Peabody & Sherman.

Busy company, hmmm? While it's been noted that WDAS slate was thin (it was), things have started to pick up as we've reported here. Slowly they're putting together a list of films, steadily building a collection of stories that can work their way through the production line. Eventually a film should/could come out ever year to a year and a half depending on how smoothly things go over the next year as plans become more defined.

But I'm sure it's not coming together as fast as some would like to hold the talent there though...
Posted by Honor Hunter at 6:20 PM

Two observations: 1) DWA's announced slate has more original films than it does sequels. This surprised me (in a good way). It's also something that Pixar cannot claim. It's announced slate is Cars 2, Brave, and Monsters 2.

The 4 films in the middle (Rise of Guardians, Croods, Turbo and Me And My Shadow) all sound interesting and is exciting. Madagascar 3 and Puss in Boots do NOTHING for me. Kung Fu Panda would leave me flat as well, except I just saw the new preview and the animation is truly amazing looking. Hope the story does as well. I still think DWA is a bit second-fiddle to Pixar, but it's obvious that Pixar has raised the bar for Dreamworks and ALL animation, and the benefactor will be us fans (Rango was a very impressive film and Rio looks promising). Personally, I have a hunch that Cars 2 is gonna kick a**, Monster Inc. 2 will be HUGE, and Brave will be a beautiful film. It's exciting to know so many possibly great movies are heading are way.

It would seem everyone has sequelitis, including Pixar. But hey, why try anything new when there's money to be milked from exisitng characters. Walt tried doing sequels once with the Three Little Pigs characters and realized "you can't top pigs with pigs" and never did sequels again. I think it would be wise of the animation studios to keep that in mind before we have Kung Fu Panda 6 and Cars: V-8.

And why is the Dragon movie pushed back to 2014? That sucks.

Where the heck are the other Kung Fu Panda movies?
Anyway, the Croods looks good. Rise of the Guardians might be good but I'm a little bit skeptical... maybe it'll surprise me. Same thing about Turbo. That should be a title for a NASCAR movie, and I can't say I'm excited for that. It's pretty stupid that they're making a "Mr. Peabody and Sherman" movie but maybe it'll be funny.

I'm not sure what they could do with HtTYD 2, but hey, they come up with a darn lot of stuff. It could be good.

Pixar "raised the bar"? I thought everyone was just trying to copy what Pixar does. Talk to me about raising the bar when someone makes a CGI animated film that can't even be compared to Pixar.

That said, the only one in the list I'm moderately interested in is Peabody and Sherman. Unfortunately there is not a good track record for films made from Rocky and Bullwinkle characters, so I'll hold out until I see some previews.

Most of the films have interesting premises, so let's hope they turn out to be good.