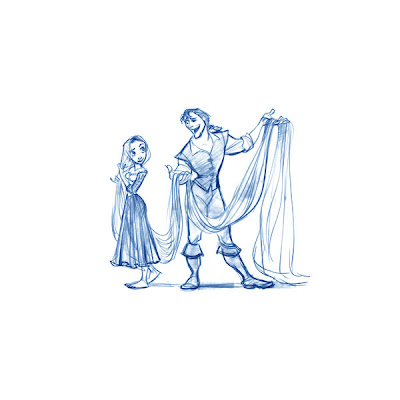 Since Blue Sky broke the news about the Moon looking to buy a star the Internet has been a buzz...

At least, for those of us that keep track of such things. Not everyone knows who does what in Disney Animation (or cares for that matter). But for those that love Disney, Glen Keane is the animated equivalent of Brad Pitt or some such other that would set Tween hearts a flutter.

Well, Steve Hulett (a former story man at the Mouse and son of famed Disney background artist, Ralph Hulett) over at the TAG Blog happened to have stumbled into Glen and posted this conversation about the rumor we reported on:

"My contract is up at Disney in May, and I'm doing due diligence, looking around, seeing what's out there. I'm 57 years old and I want to make the rest of my career count.

"I've known Jeffrey Katzenberg for a long time, and like him. And DreamWorks Animation is a dynamic studio. I also like what's happening at Disney. I think Tangled was one of our best features, and I did more drawings on it than I did working on Tarzan. It was great working with the animators on the crew, helping them take the work to the next level ..."

Check out the post for a bit more on Hulett's observations and some really snarky comments afterwards. Let's just hope that the Suits in the Hat Building know what they'll be losing, because DreamWorks Animation KNOWS what they'd be getting. Talent can sometimes come cheap, but reputations never do.

Keane is a major reason many a young animator would wind up choosing WDAS...
Posted by Honor Hunter at 4:40 PM

Personally, I don't believe the Suits even care about Glen leaving. Which is why I hope he does.

Look at how old school Imagineers have been treated these past few years. They're being shown the door, simply because they're not young and eager like the interns they constantly hire. Anyone over 55 in Glendale works with an invisible bullseye on their back. I wouldn't be surprised if Burbank suffers from the same affliction of ageism.

At 57 years, Glen is now "too old" for the Disney stable. The Mouse's addiction to youthful labor (ie, cheap) has been taking precedence over experience and talent for many years now.

Disney does not deserve to have a major talent like Glen, given this attitude. I hope he finds a new home where he'll be respected and given the creative freedom he deserves that we'll be able to fully appreciate as fans.

No offense Honor, but I hoped that you were wrong about this one.

As usual, you're not.

Lasseter, surely you understand what losing him would mean?

Maybe Pixar will pick him up? Would he go to North CA?

Pixar and Disney Animation are run by the same two people, John Lasseter and Ed Catmull, so if Disney lets him go then Pixar is going to let him go too.

I'll say what I said in the last post no this subject.

Disney/John Lasseter better not f#ck this up.

If Glen leaves there will surely be a revolt amongst Disney fans. John will lose all credibility and a new save disney campaign may come into play.

If Keane was having trouble making the film work, then it was Lasseter's job to come in and make things right. This whole idea that Keane was somehow disrespected because the story was changed is ludicrous. No one complained when Pinkava was replaced on Ratatouille or when Chapman was replaced on Brave, so why should this situation be any different?

Perhaps rather than blindly defending Keane, one could consider the possibility that maybe, just maybe, he isn't a great director?

No one at Pixar complained when Brenda was replaced by Mark Andrews? Hardly:


"Perhaps rather than blindly defending Keane, one could consider the possibility that maybe, just maybe, he isn't a great director?"

Are you next going to use the same argument against Chris Sanders, who clearly is an excellent director given his success with Lilo & Stitch and How to Train Your Dragon? Unbelievable.

Glen Keane is a master animator. He's one of the best character animators in the industry. I find it difficult to believe that someone with the talent and decades of experience that Glen possesses would not make an excellent director.

Glen fully understands story and how its driven, the filmmaking process, and how to work cooperatively with other artists. That's the basic core skill set for any successful director. Glen breathes all of this stuff without effort.

No one here who has followed his career is defending Glen "blindly."

But making wild accusations about his lack of experience and abilities is foolish and ignorant.

I find it difficult to believe that someone with the talent and decades of experience that Glen possesses would not make an excellent director.

To play Devil's Advocate, Woolie Reitherman was an excellent animator (he was one of the 9 Old Men), but his directing track record was somewhat less than satisfactory.

Not to knock Chris Sanders, who is a very talented individual, but Dean DeBlois has been a huge asset to him. You'll note Dean was not a co-director with Chris on American Dog.

It's gotta be because he wants to direct. If all Glen cared about was animating then Disney would still be his best bet, him being so far up the artists' chain and all. Honestly - I think Jeff's dangling a carrot of a director's slot (and probably a raise) in front of Glen that he's gonna take. Disney might as well give him his retirement party now.

"Later, Sanders' writing partner Dean DeBlois, co-writer and director of Lilo and Stitch, was brought onboard to assist with American Dog. Apparently that wasn't enough."

This is Anonymous 3:49. I was unaware that Dean DeBlois was attached to American Dog at some point. My mistake.

Though it sounds like DeBlois was brought on a little too late to save the film. Thankfully Sanders learned from this when he brought DeBlois onto How to Train Your Dragon from the very beginning.

"Though it sounds like DeBlois was brought on a little too late to save the film"
Too late for Mr. Lasseter, it would have been better than to hire two new directors and throw out such magnificent artwork and character design...pure gold.

Any news about the status of Keane at Disney? Does he stay at disney or he will leave? I read on TAG Blog that his contract expires on May... so, any news, dear Honor?

Any news about new movies Disney is currently working on?