Out Of The Jungle... 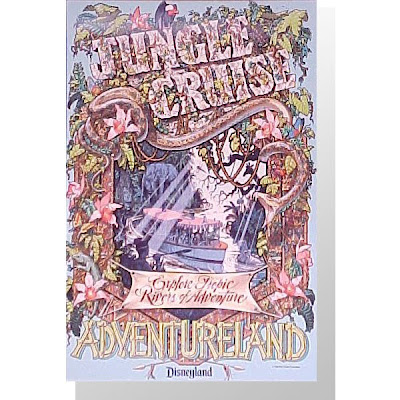 Deadline Hollywood is reporting that the long in development, "Jungle Cruise" film may be pushing through the brush...

This project has been developing for a while, with screenwriters Miles Millar and Alfred Gough turning in a draft over a year ago. The renewed interest is because of the possibility of attaching Tom Hanks and Tim Allen together on the family adventure.

Roger S.H. Schulman has been hired to write, or rewrite the script and David Hoberman and Todd Lieberman are producing the film through their Mandeville Films production shingle. No director is on board yet. Let's cross our fingers that this doesn't wind up something like "Haunted Mansion" with Eddie Murphy. Humor is fine, but this should be a film focusing on adventure and exploration, and not turn into a comedic, safari version of "Jumanji." Will it make it out of development to filming? Development Hell is littered with projects that never saw the light of day. Then again, projects that have come to fruition only to crash and burn are endless as well.

UPDATE: The Studio has released a statement:

The Walt Disney Studios is excited to be in development with Mandeville Films and writer Roger S.H. Schulman on a feature film based on the Jungle Cruise, one of the most iconic attractions in Disney theme park history. The film will pair up Tim Allen and Tom Hanks in their first live-action project, after their previous collaborations in the Toy Story trilogy.‬

Hmm, could be interesting. Since TS3 I've been thinking that it might be fun to see Tom and Tim together in a live action type of role. They just seem to go well together.

Adventure? Have you been on the Jungle Cruise since 1965? Comedy is the POINT of that ride these days. If you want adventure, go to Indy or Pirates.

The tongue should be placed firmly in cheek on this movie if they want to be respectful to the ride.

If Walt were alive today, he'd have seen to it that the Jungle Cruise ride got majorly updated or eliminated. It's a sad joke now. I feel sorry for the guys who have to narrate the thing. The last time I rode it is the last time I'll EVER ride it.

If Walt were alive today, he would not make this movie at all. The Jungle Cruise attraction was inspired by the African Queen and he would wisely assert that this would be pointless unless you remake African Queen. That would also be pointless because it is already a classic. This movie is going to reek like a big, stinking pile of...