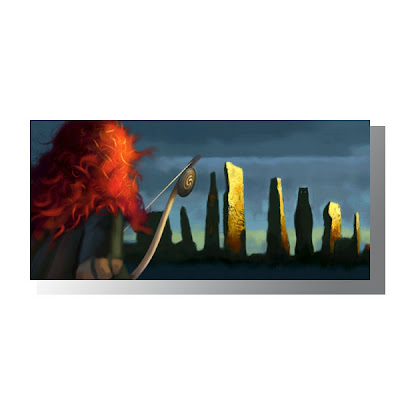 No, this isn't a piece about some artist's exhibit that was banned from a showing...

It seems that Entertainment Weekly got their hands on some concept art of Pixar's "Brave" for a first look at the feature for their latest issue. It's lovely, especially that first piece (notice the bear?). It'll be interesting to see how they handle their first fairy tale/princess film. We'll find out by summer of next year. We should be getting a teaser for this by the end of this summer/beginning of fall.

Speaking of which, by the time this film comes out, the Mouse should hopefully have released another schedule showing us the road map ahead for the Hat and the Lamp. That way we can get a clearer picture of what films have been scheduled and what surprises await us.

Hopefully Ron & Jon's other idea will have gelled by then since "Mort" sadly fell through...
Posted by Honor Hunter at 9:37 AM

God - do you ever post anything that is actually news anymore? This blog has become a snooze. All you post is day old news, pointless observations and obsessive bleeting about Tron. BORING!

More likely day of, dude. The Brave pics came out on Monday. Honor posted about it on Monday. And sorry, but did you look at the latest posts? There's one small post about Tron and nothing else. You could go to /Film or Ain't It Cool if you wanted more on TL.

If you don't like it, don't come here. I happen to like Honor's site and his comments. Of course, a Blue Sky Buzz or some such would be nice! Ha ha ha.

Still no more interested in Brave than before... *sigh* Could this be Pixar's first flop?

umm so anyway, the concept art is definitely intriguing but doesn't give much of anything away.

Mort was canned eh? I don't remember reading that bit of news. But I'm not surprised and feel a bit of relief after hearing of this. Mort just screamed Black Cauldron all over again. And as much as Disney loves repeating itself, I don't think that's something they'd want to repeat.

Yes, we all should just hope that Honor makes up stuff just to have daily reports. He shouldn't report stuff when he has news. Put something out just because you have a new day.

I don't know why you post these comments, Honor. You can't win with them. I'm sure you'll have news things to say when you have new things to say.

If anyone wants gossip and rumor alone, there are plenty of websites to choose from.

Mort wasn't really canned in the traditional sense, The estate of the author would not give up the film rights to Disney unless they also purchased options to produce the rest of the series. Disney didn't want to make that commitment to the franchise.

Nice. Now that the 2 new directors have taken the reigns of the film, it'll be interesting to see what direction this film takes.