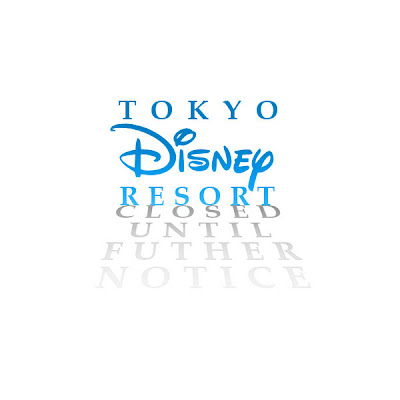 Even if the resort was ready, the areas around are not...

The Tokyo Disney Resort wasn't going to open back up on March 21, after a ten day inspection of the parks, parking lots and hotels/entertainment complexes. While some may have hoped that it would be open close to that date, the country and particularly Tokyo, have a great deal of digging out to do before there will be any opening of the Happiest Place in the Land of the Rising Sun.

With all the power outages and transportation problems it has been determined that the park is closed until further notice. As the nation recovers from a devastating earthquake/tsunami, it has been estimated the rebuilding will take approximately five years to get Japan back where it was. Put this together with the problems happening at that Nuclear plant, and it's going to be a while before things get back to normal.

I've heard that the optimistic plan would be to open the park in time for summer. A more negative assessment would be that the closure could be more than a year, but this one is highly unlikely, though not impossible. Obviously, any delay means a delay in the celebration of Tokyo DisneySEA's tenth anniversary. The start of the celebration and opening of Fantasmic! was supposed to come starting April 23. If the park did open in summer, it's not confirmed yet as to when the show would open, but in all likelihood, it wouldn't be simultaneous. A staged release, with the opening of the parks, hotels, entertainment complex and events planned for the event would happen gradually.

So, expect the news in April to come in bits and pieces as the Oriental Land Company determines not only how and when it fixes any structural problems, but how it coordinates them with reopening of the resort and the country itself. Our hearts go out to the families and friends there who have lost so much in this devastation.

Developing...
Posted by Honor Hunter at 9:21 AM

Considering what a class act OLC is, I wouldn't be surprised if they eventually gave park passes to all those affected by the disaster. Considering how many people that truly is, they could just make it easy on themselves and give a pass to everyone in Japan. OLC will open the parks when it is the RIGHT time and not worry about the bottom line.

We live in Yokohama and were planning to go to DisneySea on the Friday the quake hit. Fortunately, that morning we decided to wait to go the following week, depending on weather, or just wait for Fantasmic.

Two days ago there was a news story about TDR on Japanese TV. Some of the partner hotels surrounding TDR, such as the Hilton Tokyo Bay, are actually still open, but have few to no guests.

I've been told that this is usually a busy time for the hotels as many students go to TDL to celebrate their graduation, but nearly all of those reservations have been cancelled.

The Hilton, however, is making their onsen (hot bath) open to residents of Chiba, whose power and water was affected by the quake.

The May issue of Disney Fan magazine just came out here, and its showing all of the new Fantasmic and anniversary goods, so I hope TDR and more importantly, Japan as a nation can recover soon.

P.S. Really enjoy the blog, and all of the stories. Thanks so much.

just out of curiosity has there been any news on how the expansion section of TDS did thru the whole disaster. Seeing that the area is close to the edge of the park and there was still lots of digging and constructing going on could there have been any problems. HAs the construction been halted and if so i would think that completion dates have been put on haitus

Just want to add one bit of good news that was shown on TV this evening. TDR's Ikspiari shopping area was re-opened for business today!

Some of the Fantasmic! team is leaving for Tokyo today, the rest on April 2. Fantasmic! is moving ahead.

Mainly programmers left today. They have only been able to program 8 minutes of the 20 minute show, up until now. And they are given only 10 days once they return to complete the rest of the programming, then dress rehearsals begin. Not a lot of time if you ask me, but they seem confident.