The Man Who Directed Too Much... 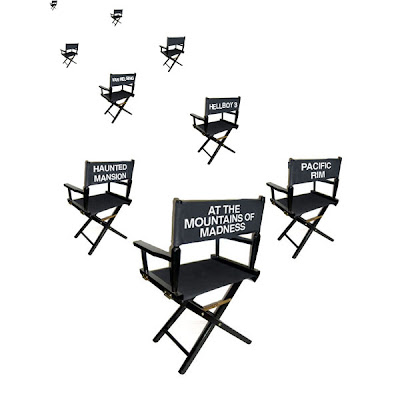 Wow, the economy is bad, but some people never run out of job opportunities...

Deadline Hollywood is reporting that Guillermo del Toro has been offered the directing gig of "Pacific Rim," the giant monster film written by Travis Beacham. This after having difficulty getting the green light for his adaptation of "At The Mountains of Madness." With James Cameron producing, Guillermo directing and Tom Cruise starring and they can't get the Universal Suits to pull the trigger? Man, this town is seriously risk averse big time. Movies such as "Apocalypse Now" could have never been made today. It's sad that this has happened.

Of course, from what I hear, Pacific Rim is right up the director's alley, and something where he would be in his element. But his heart is in this project and although he has have a dozen other films in preparation, the H.P. Lovecraft novella is the dream that he wants to wake up to. If he does decide to make the film, it'll be with the intent of showing Universal that he can make a big budget commercial film so that they'll let him make Madness.

He wouldn't be the first to do this, remember that Brad Bird took the reigns of "Mission: Impossible - Ghost Protocol" so as to prove to Warner Suits that he was capable of directing a big, live-action film and therefore be allowed to make "1906" a reality.

If Guillermo del Toro does take Rim, to make ATMOM, then that will likely be the death nail for any chance of him directing the "Haunted Mansion" remake. He already said that he was producing the script with he wrote with Matthew Robbins and that directing would be decided later and time permitting. Well, this would certainly kill the "time permitting" part. He would have to just produce/co-write it and start hunting for another director for the project. All this doesn't even address the many film projects which his name is attached to, or the "Incredible Hulk" series that he's shepherding with an eye in directing the pilot. And then he has an untitled series for cable that he's been developing for a couple years. Not to mention his entry in the video game business with "inSane." And on and on and on. The man is seriously busy and waiting for something to yell: "Action!" on.

We just don't know what will be the first one out the gate..
Posted by Honor Hunter at 4:55 PM

A $150 million horror film with a director who has never delivered a big box office hit, a producer with a habit of going way over budget, and a fading star who no longer draws audiences they way he used to. And by the way, all three of those people are probably profit participants. Nope, I can't imagine why Universal didn't want to make "Mountains of Madness".

As far as Haunted Mansion goes, I never had any confidence he was really going to direct it. But if Disney really wants him they should just wait for him. There's no reason why they have to rush it.

If they could somehow lower the budget a bit on Madness, maybe get the guys from District 9 to help find cheaper solutions to the CGI, I would hope Univeral would jump on the chance.

That being said, as much as I love the idea of it being a hard R... I read the book and while there's certainly complete bodily destruction in it I don't remember anything that would deserve an R rating in there.

I just hope this doesn't end up as Del Toro's "Man Of La Mancha." BTW... am I delusional or did I hear Gilliam finally got the rights back to that?