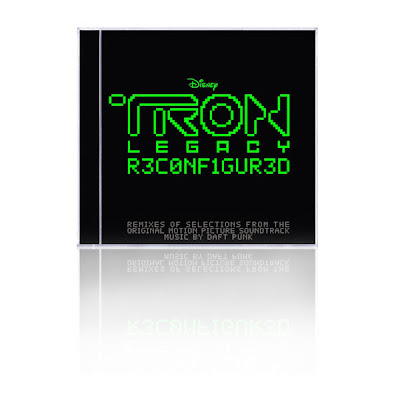 While watching the Oscars the other night I still couldn't believe that the soundtrack to "Tron Legacy" hadn't at least been nominated...

I personally think it was the best score of the year. No matter what anyone thought about the film, there has been almost universal praise for the soundtrack. And it got shafted. Hollyw00d is filled with strange folk, I guess.

Well, now the Mouse is about to release (April 5th) a second album with the film's music. This time a remix of all the Daft Punk tracks done by various artist. I can't wait to get this. Nothing like driving along the coast at night with the cool wind blowing through your window and this awesome soundtrack to enhance the ride.

Looking forward to hearing the remixes. I've been playing the soundtrack everyday for months. Never gets old.

I could be wrong, but aren't you the guy that was complaining it was blasphemy to not hire Wendy Carlos for the soundtrack?

Wendy is a dude, dude.

He's as screwed up as Larry Wachowski.

I also couldn't believe that this soundtrack wasn't at least nominated. This was the first soundtrack I actually purchased in years (and I'm glad I got the 2CD Euro version), and I still haven't grown tired of it after almost 3 months of weekly listening.

Dude, you are so right. Why was this not nominated? It was as better than Reznor's score to the Social Network.

Side note: Hmmm Reznor sounds like a Tron Character..

It was a so-so soundtrack to an awful movie. It didn't pretend to support the emotions of the characters--although I blame that on the lame direction and weak screenplay. It just doesn't sound any different than countless dozen electronic bands out there.

Well, I agree that this should have been an Oscar-nod score.

When the movie was over, the first thing I thought was how great the Score was. I'm not a musical whiz by any means, but for me....the score of Tron was what a movie score should be.

Unfortunately, because Daft Punk's score used the main theme (although quite different) from the original Tron, the Academy decided the film was not eligible in this category.