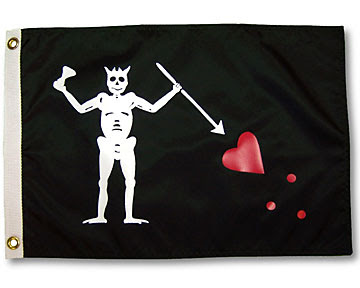 Finally, a "Pirates of the Caribbean: On Stranger Tides" trailer that actually makes me want to see it...

The last couple of trailers for POTC 4 have been ok, but have mainly played up Johnny Depp being in the film. They haven't left me all that excited, even though I planned on seeing them. I love pirates so I would go see it no matter what. But this one actually shows some of the story, and some of the new world that this film will inhabit. And it looks like a place I would want to enter.

Now there is a good reason to take a drink of this rum...
Posted by Honor Hunter at 2:04 PM

That's a lame pirate flag. Couldn't you have found a better one for your graphic?

Agreed. All of the previous trailers didn't grab my attention. Full of spectacle but nothing that really made it seem like an interesting film. This one shows that there really might be a plot behind all of the spectacle.

BOOM! Now that DOES make the other trailer look kind of slow--although the other one has more of the humor in it. I can't wait to see this movie...

"That's a lame pirate flag. Couldn't you have found a better one for your graphic?"

Sorry, but as usual, Honor is spot on. That is the actual flag of Edward Teach aka: Blackbeard.

Too bad so many people don't know history.

^Same here. Yo ho yo ho a Pirates movie for me!

"That's a lame pirate flag. Couldn't you have found a better one for your graphic?"

Actually, just as stated by Obsidian above, the flag that Honor posted makes me VERY happy from the perspective of a Teach fanboy. Every time they show Blackbeard, there is always some aspect of him that continues to make me very excited for this film. Chief of which is the burning beard with the candle wicks...