Don't short on the shorts... 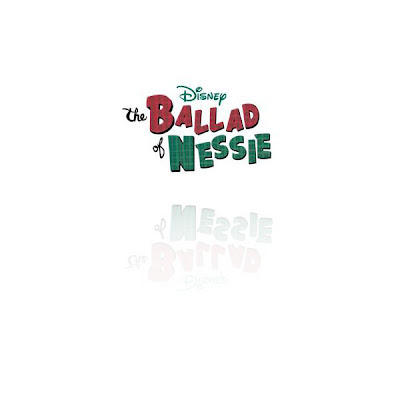 The first stills from WDAS's "The Ballad of Nessie" are out... 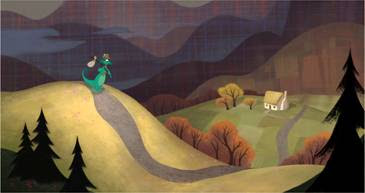 The short is definately influenced from those late 50's animated shorts that were being made by Walt Disney Productions. As most of you know, this will be playing in front of "Winnie the Pooh" when it comes out this summer. 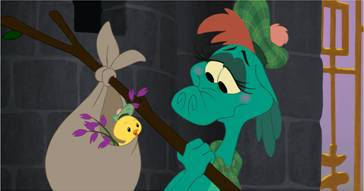 Directed by Stevie Wermers-Skelton and Kevin Deters (the directors of the awesome "Prep & Landing" and "How to Hook Up Your Home Theater") this short tells the tale of the famous Scottish monster and what happens when a greedy developer decides to build a project over her old home. Not only is the team behind Prep doing this, but Michael Giacchino has done the score for the short. That right there means it'll have a unique and entertaining sound at the least. Now, if Lasseter will just put these two in charge of a feature. Now, if they'll get those other shorts that they're working on in front of more films...
Posted by Honor Hunter at 1:59 AM

I can't wait to see this, but I want to know if we will ever see Glago's Guest.

Wow those drawings are mediocre!

Cool! Reminds me of The Reluctant Dragon :)

Totally reminds me of the Reluctant Dragon. I like the old school style animation and it is nice to see it coming back for what looks like a cute little cartoon.

FINALLY! It took them five years to make a short animated film. FINALLY Lassester did something right. Talk about taking your time with something!

"FINALLY Lassester did something right."

Yeah, finally he did.

He's done a ton of great projects, either shepherding them or directing them.

Crawl back into the cave you were in.

Animated Response, are you a sheep just like Honor. It took Lasseter five years to get three shorts up and completed when he said he would bring them back for every film. Guess what, there wasn't one for Bolt, PatF, or Tangled.

FINALLY is the correct word. Dumbass. It's a fact. Do some research. In regards to the shorts program, it took Lasster forever to get them running again. Even Honor can agree with this statement. Oh wait, he won't because his nose to too far up Lasseter's ass.