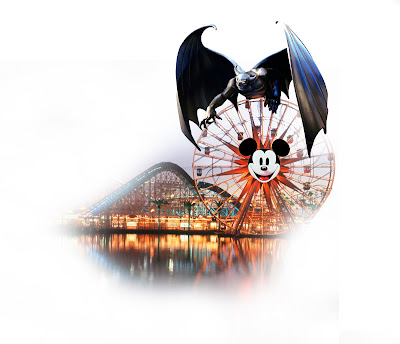 Since you had to wait so long for the last update, I thought I'd surprise you with this...

A mini-update as a bonus.

Please, please... don't all thank me at once. But I figure I'd give you a little more detail into what's going on in and around the Pier area.

Later this year when all the buzz has settled down from TSMM, the rest of the "Makeover" of Paradise Pier goes into high gear. You already know that the Sun Wheel is becoming Mickey's Fun Wheel and the work on the other areas of the PP(such as the Beer Garden and surrounding areas) start between fall and early next year, but what about that water show?

We all know that it's going to be a big show. A cross between Fantasmic! and the water show in front of the Bellagio. We all know that there will be hundreds and hundreds of jet nozzles shooting water far into the sky with projected images surrounding this spectacle, but...

Did you know how much of the Pier will actually be used for these fountains? Most have said that it will just be in front of Mickey's Fun Wheel. No, no...

Try the entire water area of the Pier. That big. Really. When the PP goes down next year to be drained so that construction can begin on the new extended area and the placement of the water and lighting system is put in it will be extensive. This will have some form of fountain display all across the whole of the area. It's no wonder that the area around Ariel's Grotto is talked about being enclosed. Guest will get drenched sitting out under those exposed canopies. The WOC show will be very intimate for audiences. As well as that, when the displays and water jets are shooting up into the air, expect to see a very familiar Disney character floating in the Pier as he'll be part of the festivities. Mickey Mouse? Nope. Donald Duck? Nooooo. Ariel? No, but technically she'll be there(more on that in a minute).

A giant Variation of the demon from "Night On Bald Mountain" will inhabit the PP show if everything goes as planed. He'll be one of the main displays on hand during the show. But he won't be the only one...

Now as over to the other side of the Pier where "The Little Mermaid" ride is going in, things are going swimmingly. Sorry, I couldn't help it. But work continues on this attraction and each day more and more details are being added. The structure and final building design have been approved and it's going to be more refined and glamorous than any of those crude pictures you've seen in the presentation last October. There's a reason why this ride's budget is up over a hundred million dollars. John Lasseter, Bob Weis and their crew are working to make sure this area is filled with tons of bells and whistles. There will be several show rooms in the ride displaying multiple scenes from the classic Disney film, but the main one, for the main song will be in the center of the building and will occupy the most space. Possibly over half of the building. It's going to be a room that is round/oval in shape and feature some of the most complex lighting and animatronics detail of any Imagineer project. The surrounding areas will feature lush foliage and trees sorely lacking in the initial creation of this park. Another glaring example of how much we need to take Paul Pressler and Michael Eisner out to the woodshed and give them a much deserved whuppin'.

Now that's not exactly a full BSA, but I thought I'd give you another kernel of what is going down instead of waiting a few weeks/a month or so before you see another update. Hope that helps to make up for the lull between Alerts.

Many of you have asked for a WDW BSA and have wondered why there hasn't been one lately. I've mentioned it before, but perhaps it's worth repeating again and elaborating. Most of my connections are around the Anaheim projects. My few Bothan connections that work on WDW have dwindled as most are no longer working on projects for the Florida parks or have left the company. So I haven't really had enough info to put into a full blown BSA. Now, should I get in touch with more WDW Bothans we'll start to have more updates, but I don't intend on putting out an update that I don't have enough information about. I'd just as soon post nothing than try and fill an entire post with a few bits about Florida. Sorry if that disappoints you, but that's the way things go.

But as more info comes in I will try and work it into the other updates or commentaries... as for the next Anaheim Alert, it won't come before mid May at the earliest. Just want to give you a heads-up on that one fellas. As for other updates(Paris, Tokyo, Hong Kong)? Time and content will determine when any and all are done. Right now, that means probably later in the summer for those.

trust me, there are people out there who do appreciate your voice and what you have to say.

It's too bad that they couldn't come up with a creative theme for the water show that celebrates water and California, instead of resorting to the default cartoons again. I'm sure it'll be a great show, but it could have been original.
Thanks for the BSA, they are exciting reads.

It's too bad that they couldn't come up with a creative theme for the water show that celebrates water and California, instead of resorting to the default cartoons again.

The name and concept for the show are creative enough!

Just because people like you say something is uncreative doesn't make it so.

Who says it's going to be California Adventure in four years? Or even California for that matter? If they did do it to California then it would really be out of place.

Well what do we end up with then?

A section resembling a CA National Park,
A sort of Hollywood section,
A carnival pier,
An entrance like LA in the late 20s,
A Cars Land, A Bug's Land,
A water area devoted to princesses and a night time water show celebrating the animated features.

What is the theme? What can they call it that will make any sense? I'm sure they can't come up with one that ties it all together. Disney's Adventures Park? It must be giving them headaches.

Hunter, thanks for the great update...but you forgot one thing...WHEW! That's a lot of info and you do a great job cranking it out.

Make that Mr. Hunter! Thanks Honor.

Covers it all, they can add anything they want under that rubric and it can be justified.

Imagineers are always saying story is top priority in all their considerations, just call the park that and you're covered. You can add Pirates, Tron, Bears, Robots, anything you like.

"Mickey's Fun Wheel" is possibly the worst idea Disney has ever had. Even more revolting than the wand over Spaceship Earth. And the rest of this tripe sounds pretty bad as well. You people are suckers. You'll see...

Honor, I have a question. This has nothing to do with this blue sky alert. But on the next one can you tell us more about "Soarin Over The World"? On MiceAge there is a DCA Project Tacker that says by 2013 "Soarin Over California" will have a new film and be called "Soarnin Over The World". Is this true?