To Everything A Season... 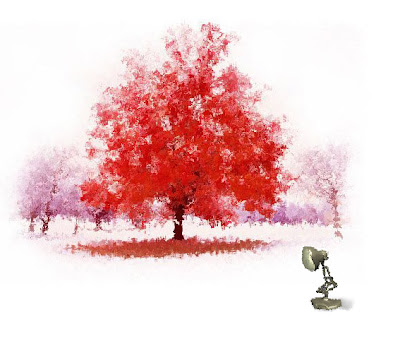 Everyone and everything experiences growing pains...

Companies just like people go through that awkward stage where they have to ask themselves: "Where do we go from here". This happens to be the case for Pixar Animation Studios, or Pixar Studios as it could likely be someday in the near future. After a decade of putting out one film after another, the company and those that run and work within it have started to feel the need to branch out and expand their creativity. Walt Disney creatively moved into other fields back in the late 40's with hybrids of animation and live-action and then full live-action films in the early 50's. Now it appears the time is at hand for Pixar and its directors to do the same.

Unlike other studios in the 90's, the Lamp became a haven for talent and creativity. Where business decisions were reflected on the story and not by what the Suits thought was demographically appropriate for audiences. Taking an art and breaking it down to a formulaic science isn't just difficult... it's impossible. Lasseter and his motley crew had the passion and talent to drive and sustain it right through the bureaucracy and someone like Steve Jobs to nurture and protect it.

As the end of its contract was running out, so were the limits it felt it could explore within its chosen field. Animated filmmakers love film just like everyone else. They don't confine their interest to a particular genre or medium. Question were asked and projects were talked about, but the ability to do something in live-action hadn't yet materialized. They knew it was in the future, but not how far in the future. The contract with Disney had everything up in the air.

The success that Pixar had in the animation, it wanted to take into live-action. It wanted to expand the way it was telling stories. It wanted to expand the kind of stories it could tell. Having no failures in its vault of hits allowed it to negotiate from a far stronger hand than many other creative studios. One of the understood byproducts of being bought by the Walt Disney Company was the unstated, unpublic agreement that Pixar would be able to move into live-action films. Slowly at first, but if success followed then many more would inevitably come. You can bet that if "1906" and "Princess of Mars" are hits... big hits, then the studio will move more agressively into live action with at least one or two pictures a year until it has a simular slate like Disney or Touchstone.

Once Jobs was able to bury the hatchet with Iger and the Lamp became part of the Mouse these plans were set in motion. A good number of Pixar's directors had already expressed an interest in making live action films. First among these was Brad Bird, who has made it no secret he wanted to movie into live-action filmmaking. Brad, unlike so many in Hollywood doesn't consider animation a bastard stepchild to live-action. Several projects he's been working on over the years like the sci-fi, film noir project "Ray Gunn" have been challenging for people to concieve of as animation. Not all of his ideas have been planned for animation... he's also had several things he's read that would make a good live-action film. A book about the Great Earthquake in San Francisco was just one of these projects. With the new power Pixar and more importantly, John Lasseter had within the company this desire he had was not only attainable, but achievable. Andrew Stanton has been wanting to make a live-action movie for a while too. Over the past couple years, he's been looking to do a big, sweeping, studio-type adventure. "Princesss of Mars" is that adventure and it's Stanton's next film. Lasseter helped secure the deal that brought the "John Carter" project back into the Disney fold. Ironically, that series was long in development at the Mouse during the early 90's for John McTiernan to direct during Jeffrey Kazenberg's tenure. Budget problems kept it from ever getting greenlit. And as most familiar with Hollywood know, the road to development hell is long and winding... in this case, it actually wound up back where it started and in very capable hands. Stanton will go full bore into "Princess of Mars" when he gets through with his publicity tour for "Wall-E" later this fall. Both are big projects that will be massive undertakings and won't be seen for a good while.

The beginning of the next decade will see Pixar emerge as a force in live action. Are these two directors the only ones the Lamp's animated studio will lose to live-action? Probably not. It's rumored that Pete Docter is grappling with this same decision right now. Brad Bird says that he plans on moving between animated and live-action. Time will tell. It's going to be difficult to come back into the laborious, slow world of animated films when you can stay in the just slow world of live-action films. I have no doubt we will see animated films that have the title "Executive Producer Brad Bird" or "Producer Brad Bird"... but "Director"? We will just have to wait and see. They may not be doing animated films, but they will still be making films that are a part of the Pixar family and also a part of the Disney family. Should things go as planned(and you know how often that happens), by the middle of the next decade Pixar will be a full partner with it's sister studios, Walt Disney Pictures and Touchstone Pictures.

We are in the process of watching something new unfold. Something that could blossom into a new and powerful force of creativity in film. It's safe to say that Pixar's spring has ended and the sun is about to shine on its promising summer.

Everything moves, everything progresses or regresses... nothing last forever, but the fact is that time doesn't stand still. It moves on... it evolves... and to all this there is a season.

Non-related, but when are you going to have a Blue Sky WDW report?

Great perspective, Honor. I also have been wondering what would change at Pixar over the next few years. Times keeps moving wether we want it to or not.

Interesting things to think about, as always, but seriously, could you put more time into spell check/grammar check/missing words check? There have been excuses for this many times, like late nights, but some of this post just didn't even make sense. I know you're a writer and it would help if a little care went into the professionalism that I know you must have. I really do enjoy this blog, every day - however, it gets frustrating. Please don't take this negatively, but as a positive criticism, and even feel free to delete my post if you choose.

It all sounds very finite. Time waits for no man, and its been fun watching Pixar evolve over the years since 1995. I just hope they never forget their roots, which is animation.