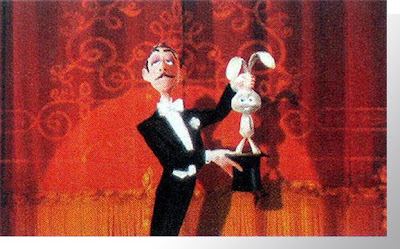 We all know that Disney is getting back into the business of making shorts again, but remember that Pixar has been putting shorts in front of their motion pictures for the better part of this decade. They're the ones that started this revival. In all the hype about "Wall-E" we've forgotten to ask about what short would be before it.

It appears that Doug Sweetland, a supervising animator at the Lamp will make his directorial debut with the short "Presto"... and here is the first shot from it.

"Short cartoon, from Pixar, released with Wall-E, on June 27, 2008. Presto DiGiotagione, a turn of the century magician, is famous for an astounding hat trick. Presto's apprentice rabbit, Alec, however, is dissatisfied as he shares none of Presto's wild success. While Presto is out eating lavish dinners, Alec is left behind, locked in a birdcage with a carrot torturously out of reach."

Hat Tip to Cartoon Brew.
Posted by Honor Hunter at 11:44 AM